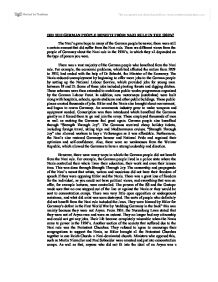 DID THE GERMAN PEOPLE BENEFIT FROM NAZI RULE IN THE 1930s?

DID THE GERMAN PEOPLE BENEFIT FROM NAZI RULE IN THE 1930's? The Nazi's gave hope to many of the German people however; there were still a certain amount that did suffer from the Nazi rule. There are different views from the people of Germany about the Nazi rule in the 1930's, in which they all depended on the type of person you were. There was a vast majority of the German people who benefited from the Nazi rule. For example, the economic problems, which had affected the nation from 1929 to 1932, had ended with the help of Dr Schacht, the Minister of the Economy. The Nazis reduced unemployment by beginning to offer more jobs to the German people by setting up the National Labour Service, which provided jobs for young men between 18 and 25. Some of these jobs included planting forests and digging ditches. ...read more.

Furthermore, the Nazi's also restored Germanys honour and National Pride and regained their optimism and self-confidence. Also, there were no weaknesses from the Weimar Republic, which allowed the Germans to have a strong leadership and direction. However, there were many ways in which the German people did not benefit from the Nazi rule. For example, the German people lived in a police state where the Nazis controlled their whole lives- their education, their work and even their leisure time. This was done through Strength Through Joy. The censorship and propaganda of the Nazi's meant that artists, writers and musicians did not have their freedom of speech if they were opposing Hitler and the Nazis. There was a great loss of freedom for the individual, as you could not have political views, and everything that was on offer, for example lectures, were controlled. ...read more.

They refused to agree to encourage their congregations to support the Nazis, so Hitler brought all the Protestant Churches together in one Reich Church- a Nazi-dominated church. Ministers who opposed this, such as Martin Niemoller and Paul Schneider were arrested and put into concentration camps. As well as that, anyone who did not fit into the ideal of an Aryan was a suspect. Gypsies were a target as well. They did not look like Aryans because they were homeless and tended not to have permanent jobs and were not 'socially useful'. In conclusion, different sections of society had different views. It can be seen that most Germans were prepared to accept Nazi rule in the 1930's and were ready to accept losing all their freedom to the Nazis, as long as they were employed and could support their family. I think that it depended on who you were at that time, as it benefited different people in different ways. ?? ?? ?? ?? ...read more.