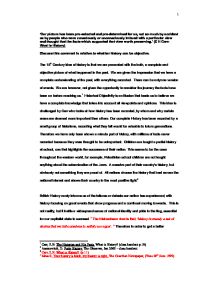 Discuss whether History can be subjective

'Our picture has been pre-selected and pre-determined for us, not so much by accident as by people who were consciously or unconsciously imbued with a particular view and thought that the facts which supported that view worth preserving.' (E H Carr: What is History) Discuss this comment in relation to whether history can be objective. The 19th Century idea of history is that we are presented with the truth, a complete and objective picture of what happened in the past. We are given the impression that we have a complete understanding of the past, with everything recorded. There can be only one version of events. We are however, not given the opportunity to consider the journey the facts have been on before reaching us. 1 Historical Objectivity is an illusion that leads us to believe we have a complete knowledge that takes into account all viewpoints and opinions. This idea is challenged by Carr who looks at how history has been recorded, by whom and why certain areas are deemed more important than others. Our complete History has been recorded by a small group of historians, recording what they felt would be valuable to future generations. Therefore we have only been shown a minute part of history, with millions of facts never recorded because they were thought to be unimportant. ...read more.

7 This idea of viewing history 'from below' gives a whole new perspective on how Britain has evolved over the years. In the past, History has been naturalised as middle class, in an attempt to make us believe that this is the only truth. 19th Century British History also serves to enforce a sense of national identity in Britain and promotes the belief that Britain is a strong, fair nation. For example Imperial narrative portrays the civilised, white nations offering support and guidance to the weak, black natives. In actual fact the natives were abused, shot and murdered by white Europeans.8 Journalist Mihir Bose states: 'If we are to understand the true story of the Empire the entire story has to be told'.9 History tells a very one sided story and we have little knowledge of the real picture. There are a few examples of 'writing back' where natives reported on their daily ordeal under Imperial rule. These accounts are extremely valuable as they give us a view from the other side, however they are few and far between and not part of mainstream history. British national identity is essential in a capitalist system, as it enforces the image that British people are one team working towards a common goal. British History also creates the impression that Britain has been improving and getting stronger over time. ...read more.

Once again, the importance of 'writing back' by challenging the majority view is important here. We need to look at what is being swept away and not considered important in our history by reading accounts that offer resistance. By challenging what we are told, we are able to unearth different perspectives and viewpoints that challenge the History we know. 13 From the points I have made, I am confident that there can never be an historical 'truth' as history is based on a process of selection encompassing personal opinions and cultural backgrounds. The meaning of history is not fixed and is always changing and our interpretation of history will be dependent on our class, gender and cultural background. We are forced to rely on history being relayed to us, but must be aware of the process the facts go through to reach us. We get a less partial view of history by having a plurality of views on any one event. This offers us a variety of interpretations and we are not herded into one specific pen of thought. Whilst we must be aware of the above, we should not undermine the importance of history. It is essential in understanding not how events happened, but how these events were understood by those recording them. By understanding that the facts have been selected, chosen, and interpreted, history can be an important tool in understanding the past. ...read more.