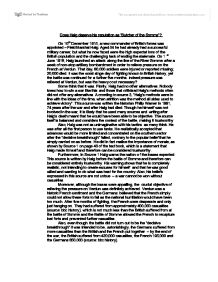 Does Haig deserve his reputation as "Butcher of the Somme"? On 10th December 1915, a new commander of British forces was appointed - Field Marshal Haig. Aged 54 he had already had a successful military career, but what he now faced were the high expectations of the British population and the challenging task of ending the stalemate. On 1st June 1916, Haig launched an attack along the line of the River Somme after a week of non-stop artillery bombardment in order to relieve pressure on the French at Verdun. That day, 60,000 soldiers were injured or reported missing; 20,000 died. It was the worst singe day of fighting known in British history, yet the battle was continued for a further five months. Indeed pressure was relieved at Verdun, but was the heavy cost necessary? Some think that it was. Firstly, Haig had no other alternatives. Nobody knew how to win a war like this and those that criticised Haig's methods often did not offer any alternatives. According to source 3, "Haig's methods were in line with the ideas of the time, when attrition was the method all sides used to achieve victory". ...read more.

to the front line was that it would have taken 2 days for him to get there and back, in which time the British forces would have had no leader. The comfort of the chateau, it is argued, made it easier for Haig to think of tactics and it was necessary for Haig to be cold in order to do his job - not visiting the front line made this possible. Haig's indifference to the amount of deaths is further disproved by the fact that after the war he spent most of his time on the welfare of ex-servicemen (instigated the Royal British Legion, Poppy appeal etc). Lastly Haig was an extremely experienced soldier when he was appointed commander and he had already had a long and successful military career. Some use this to argue that he knew what he was doing and he did what was best for the country, but he was made a scapegoat for the losses. On the other hand, some believe that the costs were largely unnecessary and were caused bad leadership from Haig. Firstly, his tactics were unimaginative and poor. ...read more.

Conversely, he would not have known about difficulties Haig faced and therefore everything he writes can only be treated as his opinion and not as facts. Also, many think that it was Haig's own fault that he was not being told accurate information and for believing it. Maybe if he had visited the front line, he would have known the truth. Source 5 sand 6 on page 42 show that Haig was much mistaken and was completely unaware of everything that was going on in the front line, which can be seen as inexcusable since it is a commander's job lead his troops to victory and this cannot be done if he is unaware of what is going on. This lead to some people believing that Haig did not consider morale, but I can find no evidence to support this claim. In my opinion, Haig was not to blame, since in the end, he did win the war and achieve the objectives. I think that losses are inevitable in a war and had it been another commander, there would still have been heavy casualties. I believe that many of the things Haig is blamed for are either not entirely true or not entirely Haig's fault. Any commander makes mistakes, Haig simply was made a scapegoat due to the population being angry. ...read more.