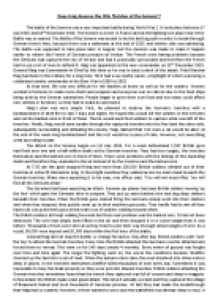 Does Haig deserve the title Butcher of the Somme?

﻿Does Haig deserve the title ?Butcher of the Somme?? The battle of the Somme was a very important battle during World War 1. It took place between 1st July 1916 and 18th November 1916. The Somme is a river in France and as the fighting tool place near it the Battle was so named. The Battle of the Somme was meant to be the last big push in order to break through German trench lines, because there was a stalemate at the end of 1915 and neither side was advancing. The battle was supposed to take place later in August, but the decision was made to make it happen earlier to relieve the French of German pressure at Verdun. The French were having problems because the Germans had captured the city of Verdun and had it practically surrounded and therefore the French had to use a lot of men to defend it. Haig was appointed as the new commander on 10th December 1915. General Haig was Commander-in-Chief by this time so he was in total control of the attack. Field Marshal Haig had been in the military for a long time. He?d had a successful career, a highlight of which was being a celebrated cavalry commander in the Boer War in 1899 to 1902. ...read more.

General Haig did not stop the battle, or change his tactics. Day after day, British soldiers went ?over the top? to attack the German trenches. Every time the British attacked the Germans counter attacked and forced them to retreat. This went on for 140 days (nearly 4 months). Every metre of ground was fought over time and time again. The longer the fighting went on, the worse the conditions became. Shellfire churned up the land into a sea of mud. When the autumn rains came the mud dissolved into slime metres deep in places. In the trenches themselves shellfire killed thousands of men every day. Sometimes it was impossible to bury the dead properly so they were put into disused trenches. British soldiers attacking the German trenches sometimes found that the trench they captured was full of corpses and deep in maggots. In November the British made a last great attack. This time it actually worked and they captured the village of Beaumont Hamel and took thousands of Germans prisoner. At last they had made the breakthrough that Haig had so wanted. However, it then started to snow and the battlefield was already deep in mud, it was swept by icy winds and blizzards. General Haig had no choice but to call off the battle. ...read more.

Haig was also given false information by his officers and advisors. His advisors often told him what he wanted to hear instead of the truth and because Haig never saw the front line, he relied solely on their reports. His officers and advisors told Haig that the bombardment had worked, the soldiers were advancing and the battle was going very well. This could be why Haig did not change his tactics. Also, because of a lack in communication skills, any messages he may have sent to try to improve the tactics may have not reached the sergeants or any messages he may have received to tell him about the real situation may have not reached him. To conclude, I think Haig does deserve the title ?Butcher of the Somme? because he was responsible for a lot of deaths, but I think that he did what he did for a good reason which overall benefitted the whole country during the war effort. I think Haig definitely deserves some of the blame, but not all of it. Haig started out in a bad situation after taking over the trench deadlock and was under time pressure as well as being told untruthful facts about the progress being made. Overall, what Haig did was for the good of the nation but it is a shame so many had to die for it. ...read more.