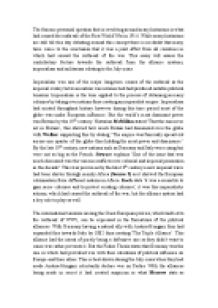 Examine the factors that caused the First World War

﻿The famous perennial question that is revolving around many historians is what had caused the outbreak of the First World War in 1914. While many historians are still till this day debating around this concept there is no doubt that many have come to the conclusion that it was a joint effort from all countries in which had caused the outbreak of the war. This essay will assess the contributory factors towards the outbreak from the alliance systems, imperialism and militarism relating to the July crisis. Imperialism was one of the major long-term causes of the outbreak as the imperial rivalry between nation was intense had had produced notable political tensions. Imperialism is the term applied to the process of obtaining as many colonies by taking over nations thus creating an imperialist empire. Imperialism had existed throughout history however during this time period most of the globe was under European influence. But the world?s most dominant power was Britain by the 19th century. Historian McMillan stated ?That the sun never set in Britain?, this showed how much Britain had dominated over the globe with Walker supporting this by stating ?The empire was famously spread out across ...read more.

But there was an opposing alliance that came under the name of ?The triple Entente? in 1907. The reason for the formation of this alliance between Britain, France and Russia was to match the treat that Germany posed on them thus also supporting the Fisher thesis. With the 6 European powers divided into 2 blocs (Source 4) Thomas believed that it was a system of allies in which had transformed a system of defensive management into one of offense. With the signing of the treaty of London or the Scraps of Paper (Source 5), due to the fact of this when Germany had crossed the Belgium border Britain had declared war showing how a simple alliance treaty, which was purely made for defensive measure, could be changed into one of offense. While the alliance system was crucial into the understanding of the war militarism was another cause into the outbreak of the war and is also related towards the July crisis. The crucial impetus that had caused the outbreak of the world war was militarism. The nationalist rivalry recurring around militarism was between Britain and Germany concerning their navy and armies. ...read more.

However Keegan opposed this statement as he suggests that whether it was a long-term or short-term cause war wasn?t inevitable, thus putting the blame on all the countries for the lack of communication during the crisis. When Germany had prompted Australia-Hungary to take immediate action against Serbia for the assassination, thus reluctantly declaring war on the 28th of June after the ultimatum had been declined, this showed Germanys heavy involvement in international affairs almost to the point of them wanting war. It is during the July crisis that Fisher strongly believes that Germany was the one to blame due to their heavy involvement and almost reluctantly making Austria-Hungary declare war. Morrow stats another event during the crisis that supports the thesis was the scraps of paper signed in 1839 (Source 5) involving Germany, Britain and Belgium. The thesis stats that while Germany were trying to make an imperialist empire thus knowing to step into Belgium borders would trigger the Britain, thus having a chance to defeat them and becoming the biggest power. This was why the July crisis may have been a short-term cause but it was one of the immediate reasons for the outbreak of WW1. ...read more.