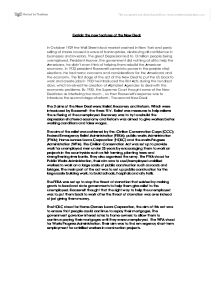 Explain the new Features of the New Deal

Explain the new features of the New Deal

In October 1929 the Wall Street stock market crashed in New York and panic selling of shares caused a wave of bankruptcies, destroying all confidence in businesses and investors. The great Depression led to 13 million people being unemployed. President Hoover, the government did nothing at all to help the Americans, he didn’t even think of helping them rebuild the American economy. In 1932 president Roosevelt came into power in the presidential elections. He had many concerns and considerations for the Americans and the economy. The first stage of the act of the New Deal to put the US back to work and create jobs in 1933 he introduced the first Acts during the hundred days, which involved the creation of Alphabet Agencies to deal with the economic problems. By 1935, the Supreme Court thought some of the New Deal laws as interfering too much. , so then Roosevelt's response was to introduce the second stage of reform- The second New Deal.

The 3 aims of the New Deal were: Relief; Recovery and Reform. Which were introduced by Roosevelt- the three ‘R’s’. Relief was measures to help relieve the suffering of the unemployed. Recovery was to try to rebuild the depression-shattered economy and Reform was aimed to give workers better working conditions and fairer wages.

The aim of the relief was achieved by the: Civilian Conservation Corps (CCC); Federal Emergency Relief Administration (FERA); public works Administration (PWA); Home owners Loans Corporation (HOLC) and the works Progress Administration (WPA). The Civilian Conservation Act was set up to provide work for unemployed men under 25 years by encouraging them to work on projects in the countryside such as fish farming, planting trees and strengthening river banks. They also organised the army. The PWA stood for Public Works Administration, their aim was to use Unemployed unskilled workers to work on a large scale of public construction such as roads and bridges. The main part of the act was to set up public construction for the large scale building work, to build schools, hospitals and city halls.

The HOLC stood for Home Owners Loans Corporation, the aim of this act was to ensure that people could continue to repay their mortgages. The government gave low interest rates to home owners to allow them to continue paying their mortgages until they were unemployed. The WPA stood for Works Progress Administration. Their aim was to find emergency short-term employment for unskilled workers in construction projects.

The Acts that were part of the New Deal and helped with Recovery were: The Emergency Banking Act; the Securities Act; the Agricultural Adjustment Administration (AAA); the National Recovery Administration (NRA) and the Tennessee Valley Authority (TVA). The Emergency Banking Act aimed to solve the financial crisis after the Wall Street Crash by forcing all banks to remain close for 4 days. This actually worked and saved all the banks. The Securities Act was about providing full information about the companies issuing new shares, to the public. This established with a Securities and Exchange Commission in 1934 which was giving powers to control the activities of the stock market. It was the AAA’s duty to solve agriculture’s most serious problem which was over-production. Prices were low and farmers were unable to make a decent living. Roosevelt paid farmers to stop producing. The AAA gave the government power to destroy surplus food and give farmers compensation. The NRA stood for National Recovery Administration; they tried to create partnership between government and Industry to get rid of Child Labour, Long hours and Low pay. Each industry would agree an employment code with a government. The code was to guarantee workers fairer working conditions and wages. The TVA stood for Tennessee Valley Authority. The main parts of the act was to help encourage industry come to the hard hit valley and to build damn to use hydroelectric power of the river.

Finally, there were parts of the New Deal that helped to reform the USA. They were: Collecting Bargaining; the Wagner Act and the social securities Act. Collective bargaining was where workers had the right to collective bargaining of wages. This gave an enormous boost to the trade unions.

The Wagner act (1935) was the given right for workers to join the trade union which restored protection for the workers also. The Social Securities Act was introduced in 1935. This provided old age pensions, unemployment benefits and financial support for the handicapped. It was funded by contributions paid by workers, employers and the government.

In Conclusion, when Roosevelt came into power he aimed to achieve relief, recovery and reform. The CCC, FERA, WPA and the HOLC. The emergency banking act, the Securities Act, NRA, AAA and the WPA achieved recovery. Collective Bargaining, Wagner Act and the Social Securities Act achieved reform. These Acts were all produced to help America by these 3 aims.