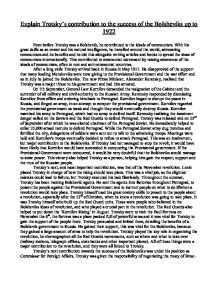 Explain Trotsky's contribution to the success of the Bolsheviks up to 1922 Even before Trotsky was a Bolshevik, he contributed to the ideals of communism. With his great skills as an orator and his natural intelligence, he travelled around the world, advocating communism and its benefits and he did this alongside writing articles and books to spread the ideas of communism internationally. This contributed to communist movement by raising awareness of the ideals of communism, often in non and anti communist countries. After a long exile Trotsky arrived back in Russia in May 1917. He disapproved of the support that many leading Mensheviks were now giving to the Provisional Government and the war effort and so in July he joined the Bolsheviks. The new Prime Minister, Alexander Kerensky, realized that Trotsky was a major threat to his government and had him arrested. On 7th September, General Lavr Kornilov demanded the resignation of the Cabinet and the surrender of all military and civil authority to the Russian Army. ...read more.

Throughout the summer, Trotsky has been training Bolshevik agents. He sent the agents into factories throughout Petrograd, to poison the people against the Provisional Government and to instruct people on what to do if/when a revolution would take place. Trotsky himself used his great oratory skills to preach to the people about a revolution, especially after the 23rd of October, when he knew a revolution was going to take place. It was Trotsky himself who built up the Red Guard units. These were people who believed in the Bolsheviks ideas of revolution, and who played a crucial part in the revolution. The Red Guards also helped to put down the 'Kornilov Rising' in August. Trotsky went to visit the Paul Fortress on November the 6th, the fortress was a place packed full of powerful arms and it was vital for Trotsky to gain the support of the people there. Trotsky persuaded and bribed them, detailing the benefits of a Bolshevik government to Russia. ...read more.

The threats included imprisonment of the officer, or the imprisonment of the officer's family. Through this terror, Trotsky managed to recruit 22,000 officers who in turned transformed them in a proper army. However there remained loyalty issues in the army forcing Trotsky to enforce his terror to a greater extent through rules including: * Any one who incited desertion or anyone that did not fulfil a military order would be shot. * Any/Every Red Army member who deserted his post would be shot. * Any/Every who sells their equipment will be shot. * Those guilty of harbouring deserters will be shot. * Houses in which deserters are found will be burned down. It was through this terror system, Trotsky managed to eventually win the civil war after three years, against a withering white army. In conclusion, Trotsky's contributions were extremely influential for the success of the Bolsheviks. All of the pivotal points in the Bolshevik years were all related to Trotsky, and I believe that he was the determining factor of these pivotal points. He contributed greatly with his tactics and strategies, his military prowess, his intelligence and his charisma. ...read more.