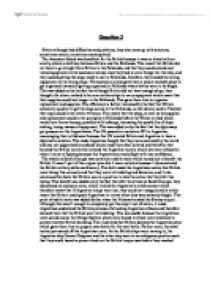 Question 3 Britain although had difficulties and problems, they also came up with solutions, sometimes natural, sometimes contemplated. The Ascension Island was beneficial for the British because it was an island with an airstrip which is half way between Britain and the Falklands. This meant that British did not have to go straight from Britain to the Falklands, and that they could unload and reload equipment on the ascension island, since they had to cram things into the ship, and they rushed getting the ships ready to sail to Falklands, therefore, they loaded the wrong equipment on the wrong ships. The ascension island gave them a secure and safe place to get organized instead of getting organized in Falklands where battles were to be fought. This was added on by the fact that although Britain did not have enough ships, they thought of a clever method to borrow civilian ships to carry equipment which meant that their supplies could last longer in the Falklands. This gave them time to organize replacement and supplies. This efficiency is further increased by the fact that Britain acted very quickly to get the ships across to the Falklands, as the admiral said to Thatcher that ships could arrive within 48 hours. ...read more.

The sinking of the Belgrano also forced all other Argentine ships back to port, as they were scared of another British attack. This meant that Britain was benefitted, as they did not have to encounter any Argentine ships and risk losing ships and equipment. They had a larger possibility to reach port safely. British troops were well trained and had decent equipment. These well-trained troops were benefitted from their training when the helicopters were destroyed as they had to yomp across the island which was about 50 miles long. Because of their supreme fitness, Britain did not have to waste more equipment to help out the soldiers which meant that they could be reserved for later and more desperate circumstances. This was added on further by the point that British had good tactics on night-fighting and they were excellently equipped with night-fighting equipment which helped the face that the British could relied on the darkness as an advantage, and they also had excellent tactics on outflanking the Argentineans, this therefore meant that some of their troops could take the Argentineans by surprise when they were unaware at the rear or on the wings so they could win easier. ...read more.