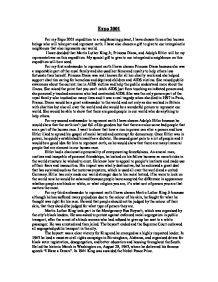 For my Expo 2001 expedition to a neighbouring planet, I have chosen three other human beings who will take part and represent earth.

Expo 2001 For my Expo 2001 expedition to a neighbouring planet, I have chosen three other human beings who will take part and represent earth. I have also chosen a gift to give to our intergalactic neighbours that also represents our world. I have decided that Martin Luther King Jr, Princess Diana, and Adolph Hitler will be my representatives on this expedition. My special gift to give to our intergalactic neighbours on this expedition will be a seed. For my first ambassador to represent earth I have chosen Princess Diana because she was a respectable part of the royal family and she used her fame and royalty to help others less fortunate than herself. Princess Diana was well known for all her charity work and she helped support charities caring for homeless and deprived children and AIDS victims. She raised public awareness about the current rise in AIDS victims and help the public understand more about the illness. ...read more.

He knew how to appeal to people's instincts and made use of their fears and insecurities. His impact was wholly destructive, but he achieved a great deal that has survived such as the motorway system, which is used all over the world and a united Germany. Hitler has only made our world stronger due to his racial hatred, if he were to look on the world now he would be ashamed because people have accepted the difference in appearance whether people are black or white, or what religion you are, it's what sort of person you are that matters the most. For my third ambassador to represent earth I have chosen Martin Luther King Jr because although he has suffered many prejudices due to the colour of his skin, he fought for what he thought was right for his race. He said that people should not be judged by the colour of their skin, that they should be judged for what type of person they are. ...read more.

The seed portrays the earth properly, how the world is growing larger through time. The seed can represent humans the growth of the population or it could represent plants. This is how our world began like a seed, and through time the world has grown just like a seed would. In the event of a technical fault my three ambassadors have been put in order of importance with Princess Diana being the most important, Adolph Hitler the second and Martin Luther King being the third. I would have to dispense Martin Luther King because although he was a great success amongst black people, Princess Diana has proved that she has done a lot more for charities and helped with the awareness of the public on terminal illnesses such as AIDS. Even though Adolph Hitler has caused great pain to people and was a racist he would have to stay, as there would be a balance between him and Diana, between good and evil. It would be a fair to have different people to represent the earth to show that all is not good in our world. ...read more.