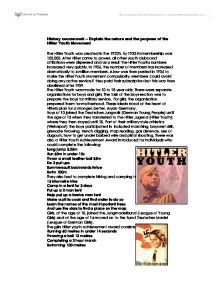 Do 2 pull ups Summersault backwards twice Swim 100m They also had to complete hiking and camping tests: 15 kilometre hike Camp in a tent for 3 days Put up a 2 man tent Help put up a twelve man tent Make a pit to cook and find water to do so Learn the names of the most important trees And use the stars to find a place on the map Girls, at the age of 10, joined the Jungmadelbund (League of Young Girls) and at the age of 14 moved on to the Bund Deutscher Madel (League of German Girls). The girls Hitler youth achievement award consisted of: Running 60 metres in under 14 seconds Throwing a ball 12 metres Completing a 2 hour ...read more.

Looking at all of this from an objective point of view I have deduced that the purpose of the Hitler Youth movement was to prepare. This was to prepare the girls for a life at home, thus encouraging child birth which links in with another of Hitler's ideals; that the place for the woman was Kinder, K�che, Kirche (children, kitchen, church). However there was also another purpose, the teachings of Hitler. This war to indoctrinate member to ensue a firm strong love of Hitler's and a heart and head full of brainwashed Nazi ideals. This was also drilled in the heads of the boys however their preparation was that of military preparation to get them ready for military service. This was going to prove to have been extremely successful in the world war which then followed. ...read more.