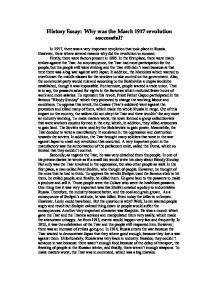 History Essay: Why was the March 1917 revolution successful?

History Essay: Why was the March 1917 revolution successful? In 1917, there was a very important revolution that took place in Russia. However, there where several reasons why did the revolution to succeed. Firstly, there were factors present in 1905. In the first place, there were many strikes against the Tzar. As a consequence, the Tzar had more participation for the people, but the people still were striking and the Tzar still didn't react because at that time there was a big war against with Japan. In addition, the Marckists which wanted to overthrown the middle classes for the workers to take control on the government. Also, the communist party would rule and according to the Bolsheviks a utopia would be established, though it was impossible. Furthermore, people wanted a trade union. That is to say, the peasants asked for rights in the factories which included fewer hours of work and more salaries. To represent this revolt, Priest Father Gapon participated in the famous "Bloody Sunday" which they protested to change the working labour and conditions. ...read more.

Not only was the Tzar involved in the oppression, but also other people as well. In the first place, a man called Peter Stolitin, who thought of people. However, he thought of the ones that he had to think. To oppress the revolts Stolipin used the famous stick to hit them, he exiled people, and finally, he killed them. He gave land to the peasants to make a produce and sell it. Those people were the Culacs who were the healthiest peasants. One thing that it was very important was that Stolitin created a policy to industrialize Russia. Therefore, the industry became better, and the coal and grain grown. As a consequence of Stolipin�s attitude, he was killed. Even today the killer is unknown. However, Lenin could have been. But the question is why? Well, Lenin wanted people angry and revolt but Stolipin calmed thing down or people would suffer the consequences. Another very important character was Rasputin. He was a munch which gave the Tzar and the Tzarina advices and manipulated them very easily, which made the aristocrats unhappy. ...read more.

The political parties did not stick together, but this time they did. By 1917, the strikes kept spreading and this time the army was on the side of the strikers. This is a very important point to remark because the army was the one who had more power, weapons and people, which helped the rebellion to succeed. Another important fact was that the Duma was going to decide to set up a Provisional Government, which would overthrown the Tzar and the leader would be Kerensky. However, the Soviets would set up against this, (especially the petrograts). The Provisionary Government acknowledges that they had to"Peace, land, food". In addition, the peasants started killing aristocrats and have land, which made allies, and therefore, the war would go on. Meanwhile, Lenin came back from exile, and went to the Petrograts and finally took the phrase"Peace, land, food". Finally by the end of 1917, the Tzar was finished and the revolution succeeds without a stable government. On balance, the revolution was very efficient. However, it took a lot of time to come to the end of it and the whole country suffered and many of them died on a trenching death ...read more.