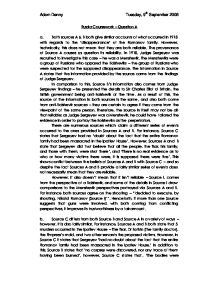 Russia Coursework - Question A a. Both sources A & B both give similar accounts of what occurred in 1918 with regards to the 'disappearance' of the Romanov family. However, technically, this does not mean that they are both reliable. The provenance of Source A causes us question its reliability. In 1918, Judge Sergeyev was recruited to investigate this case - he was a Menshevik. The Mensheviks were a group of Russians who opposed the Bolsheviks - the group of Russians who were suspected for the supposed disappearance. The information in Source A states that the information provided by the source came from the findings of Judge Sergeyev. In comparison to this, Source B's information also comes from Judge Sergeyev findings - he presented the details to Sir Charles Eliot of Britain, the British government being anti-Bolshevik at the time. As a result of this, the source of the information in both sources is the same, and also both come from anti-Bolshevik sources - they are certain to agree if they come from the viewpoint of the same person. Therefore, the source in itself may not be all that reliable; as Judge Sergeyev was a Menshevik, he could have tailored the evidence in order to portray the Bolsheviks as the perpetrators. There are numerous sources which claim a different series of events occurred to the ones provided in Sources A and B. For instance, Source C states that Sergeyev had no 'doubt about the fact that the entire Romanov family had been massacred in the Ipatiev House'. However, Sources A and B state that Sergeyev did 'not believe that all the people, the Tsar, his family, and those with them, were shot there', and 'There is no real evidence as to who or how many victims there were. ...read more.

If he admitted that he was in the room at the time of the killing, this would surely establish his guilt - and as he denied he was in the room, yet Source H states that there was an additional man whom Medvedev did not account for, this immediately leads us to believe that he was the extra man, which questions the sources reliability. However, Source D could also be fairly reliable. Source E, is an account of the murders by Medvedev's wife - with all of her information coming from Medvedev himself. Medvedev will have no doubt held his wife in high esteem, bestowing her with a large amount of trust. Consequently, she will have known the true sequence of events which happened in the Ipatiev House. Some of the information in Sources D and D agree with each other - for instance, Source D states that Medvedev saw 'all of the members of the Tsar's family lying on the floor', Source E states that the guards 'started firing, and killed them all'. The fact that both these sources agree does establish a slight amount of reliability for both of them. d. Sources F, G, and H, are all graphical sources relating to the murder of the Tsar. However, some are more reliable than the others. For instance, Source F is a photograph - it shows the exact state that the room was in, and is therefore indisputable. Source H is also a factual source - however it comes purely from the perspectives of the witnesses, and so although this may seem reliable, it may not be as reliable as first thought. ...read more.

This implies that although, we can believe some parts of Source C; others do not seem to be all that factual. In addition to this, Source J states that the lorry which contained the corpses of the royal family became ''bogged down'' in a swamp in Ekaterinburg. Source B states that at the time, ''no corpses were discovered''. This therefore validates the claim made in Source B that no corpses were located - supporting Source B and implying that it is reliable. However, it also disagrees with Source B. Source B states that 'a train left Ekaterinburg and it is believed that the surviving members of the royal family were on it'; whilst Source J deviates from this as it proves that the corpses of the Empress and three daughters were also discovered with that of the Tsar's - dental records positively identified ''Nicholas II, his wife and three of their daughters''. If accurate tests have proved that the Empress and three of the Tsar's daughters were also murdered with the Tsar, then this eliminates the possibility that some members of the royal family escaped - and so no surviving members could have left Ekaterinburg on a train on a later date, which implies that Source B may not be all that factual. In conclusion, although Source J does confirm some of the details of certain sources, it does disagree with others, and therefore it does not completely construct the period in which the Romanov's were murdered. For instance, it does not corroborate the claim made in Source B that the ''Tsar, Dr Botkin, the Empress's main'' etc were murdered in the Pieties House. As a result of this, we cannot use Source J to fully authenticate the events. ?? ?? ?? ?? Adam Denny Tuesday, 9th September 2008 ...read more.