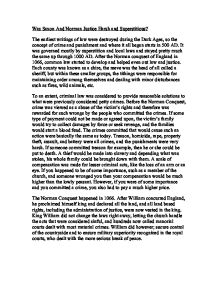 Was Saxon And Norman Justice Harsh and Superstitious? The earliest writings of law were destroyed during the Dark Ages, so the concept of crime and punishment and where it all began starts in 500 AD. It was governed mostly by superstition and local laws and stayed pretty much the same up through 1000 AD. After the Norman conquest of England in 1066, common law started to develop and helped even out law and justice. Each county was known as a shire, the reeve was the head of all called a sheriff, but within these smaller groups, the tithings were responsible for maintaining order among themselves and dealing with minor disturbances such as fires, wild animals, etc. ...read more.

If some type of payment could not be made or agreed upon, the victim's family would try to collect damages by force or seek revenge, and the families would start a blood feud. The crimes committed that would cause such an action were basically the same as today. Treason, homicide, rape, property theft, assault, and battery were all crimes, and the punishments were very harsh. If someone committed treason for example, then he or she could be put to death. ...read more.

However, if you were of some importance and you committed a crime, you also had to pay a much higher price. The Norman Conquest happened in 1066. After William concurred England, he proclaimed himself king and declared all the land, and all land based rights, including the administration of justice, were now vested in the king. King William did not change the laws right away, letting the church handle the acts that were considered sinful, and hundreds now called manorial courts dealt with most material crimes. William did however; secure control of the countryside and to ensure military superiority recognized in the royal courts, who dealt with the more serious break of peace. ...read more.