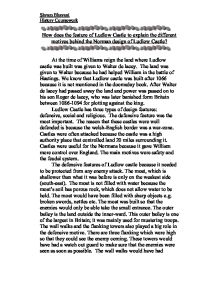 How does the feature of Ludlow Castle to explain the different motives behind the Norman design of Ludlow Castle? At the time of Williams reign the land where Ludlow castle was built was given to Walter de lacey. The land was given to Walter because he had helped William in the battle of Hastings. We know that Ludlow castle was built after 1066 because it is not mentioned in the doomsday book. After Walter de lacey had passed away the land and power was passed on to his son Roger de lacey, who was later banished form Britain between 1086-1094 for plotting against the king. Ludlow Castle has three types of design features: defensive, social and religious. The defensive feature was the most important. The reason that these castles were well defended is because the welsh-English border was a war-zone. Castles were often attacked because the castle was a high authority place that controlled land 20 miles surrounding it. Castles were useful for the Normans because it gave William more control over England. ...read more.

The new bridge was made out of stone unlike the old one which was mostly wood, and there was a drawbridge so is could have been closed when the enemy was seen. The keep has very few Norman windows because windows would make it easier for the enemy invade the castle. The arrow looms on the keep is narrow on the outside so enemies would find it hard to fire in. The buttress was later added to stop enemies from mining. The sally port was built on the ground floor by the side passage. There were machicolation, what they were used for is unknown. Historians say that they could have been used as food holes to throw down to prisoners or could have been a defensive feature. It could have been used as a defensive feature because if the enemy had entered the castle the defending soldiers would be able to pour boiling liquid on them. A clever defensive feature was the spiral staircase, which was extremely small so that the enemy could not charge side-by-side going up in the castle. ...read more.

The Normans were very religious people and believed that the Norman Conquest would not have worked without the help of God. This leads to a Religious motive to the castle. People were much more religious then, then what they are now. God was at the top of the feudal system. Ludlow castle has a chapel. The chapel was round; the design was copied from the Muslims. The chapel name is St. Mary Madgelane. The carving and the pillars were built in 1099. Blind arcade were everywhere to show importance of the chapel and there were large windows to let the light in. There are crenellations on top of the chapel but we don't know if they were a defensive feature just to fit in with the rest of the castle. The site of Ludlow Castle is different now then what it was in the Norman times. Now there is an old palace built in the castle area but the Norman remains of the castle still stand. The keep of the castle The arched Norman style windows were replaced by large square ones in Tudor times. Inside View of The Keep Chapel Shyam Bhayani History Coursework ...read more.