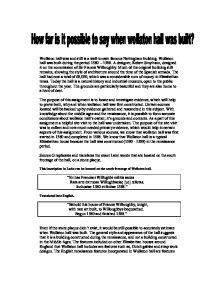 How far is it possible to say when Wollaton hall was built?

Wollaton hall was and still is a well-known famous Nottingham building. Wollaton hall was built during the period 1580 - 1588. A designer, Robert Smythson, designed it on the commission of Sir Francis Willoughby. Much of the original building still remains, showing the style of architecture around the time of the Spanish armada. The hall had cost a total of �8,000, which was a considerable sum of money in Elizabethan times. Today the hall is a natural history and industrial museum, open to the public throughout the year. The grounds are particularly beautiful and they are also home to a herd of deer. The purpose of this assignment is to locate and investigate evidence, which will help to prove both, why and when wollaton hall was first constructed. Certain sources located will be backed up by evidence gathered and researched in this subject. With knowledge about the middle ages and the renaissance, it is possible to form accurate conclusions about wollaton hall's owner; it's grounds and contents. As a part of this assignment a helpful site visit to the hall was undertaken. The purpose of the site visit was to collect and note much needed primary evidence, which would help in certain aspects of this assignment. From various sources, we know that wollaton hall was first started in 1580 and completed in 1588. We know that Wollaton hall is a typical Elizabethan house because the hall was constructed (1580 - 1588) in the renaissance period. Source G replicates and translates the exact Latin words that are located on the south frontage of the hall, on a stone plaque. This inscription in Latin can be located on the south frontage of Wollaton hall. "En has Francisci Willughbi militis aedes Rara arte extrucas Willughbaeisq [ue] relictas. Inchoatae 1580 et finitae 1588." Translated into English. "Behold this house of Francis Willoughby, knight, with rare art built, to Willoughbys bequeathed. ...read more.

However, sir Francis Willoughby insisted that the kitchen to be down in the basement area and not on the ground floor as stated in source E. This would have made Wollaton hall a fashionable Italian style kitchen, one of the first in the country. It is likely he did this to enable there to be more space or maybe to be different and to be noticed, this is probably what he wanted. The great hall is virtually unaltered. However, it does have two new entrances when compared to Smythson's plan of the hall. The highly decorated screen passage still has its original pillars and strap work. The hall also includes a fine Renaissance fireplace with the Willoughby's family coat of arms and their owl symbol. Unusually the great hall is in the centre of the hall and not on an outer wall. Windows high in the centre tower light the great hall. The kitchen can be found in the basement. It still has a large fireplace with metal spits for cooking joints of meat. Now however, it is now a boiler room full of machinery and pipes. Sir Jeffrey Wyattville extended the parlour in the 1840's. Now it has a modern plaster ceiling and an Adam's style fireplace, which is not from Tudor times. The great chambers were originally supposed to be luxurious for a Queen and her prince. Now all the wooden panels have been removed from the walls, although some Italian plasterwork on the ceiling still remains. Parts of these bedchambers have been employed as display areas for the natural history collection. The long gallery still exists on the ground floor, but now has become divided by two false walls into three sections. The windows are masked off and are artificially lit to show off rocks, minerals and fossil collections for public display. The most unusual room in Wollaton hall is the prospect room. ...read more.

Wollaton hall does have some unique features that are not found anywhere else. Instead of being an E or H shaped building it was rather a square shape with four corner towers. Willoughby insisted that Wollaton hall be a tall house, unchallenged in its height. It has a tall centre tower with old-fashioned tracery windows. The affect was intended to make the hall appear like an old building surrounded by a newer one. Elizabethan nobles like Sir Francis Willoughby loved anything new or different. These differences were called 'devices.' The centre tower was a perfect example of a 'device'. It incorporated windows that could be said to be more suitable for a church rather than a house. Wollaton hall also contained a prospect room with no real purpose other than to look at the surrounding land. All Elizabethan houses have similar features as well as unusual styles and details. From this point of view Wollaton hall is a typical Elizabethan house. A house like Wollaton hall was the result of the influences of master mason that built it and the wishes of the owner who paid for it. At Wollaton hall it was Robert Smythson who used all the general styles of Elizabethan architecture and it was Sir Francis Willoughby who saw new details in his collection of architectural books that he insisted be used on his house. The result was that Wollaton hall became cluttered with new details that are impressive but 'uncomfortable' to view and appreciate at first sight. Wollaton hall could be said to be an attractive structure, built decoratively and attractively. The contrast between Wollaton hall and Hardwick hall for example indicates how Willoughby's personality and style differed. Wollaton hall and Hardwick hall both had the same mason, similar features but an immense difference in appearance. Hardwick hall's owner, Bess of Hardwick had a secure personality. Hardwick hall wasn't over decorated. The over decorated Wollaton hall however tells us the owner had an insecure personality. Ultimately Wollaton hall was intended to reflect Sir Francis Willoughby's personality and style, something that evidently doesn't impress the majority of individuals. ...read more.