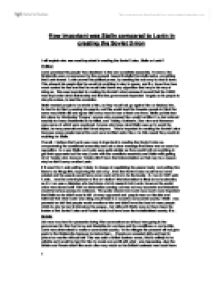 `How important was Stalin compared to Lenin in creating the Soviet Union I will explain who was most important in creating the Soviet Union, Stalin or Lenin? Political Lenin promised his people 'free elections' to the new constitute assembly. However, the Bolsheviks were overpowered by the peasant-based Socialist Revolutionaries, something that Lenin feared. Lenin proved his political power, by sending the red army to shut it down. This showed his people that he would do anything to stay in power, and it shows then how much control he had and that he would take down any opposition that way in his way of doing so. This was important in creating the Soviet Union because it meant that the USSR was kept under strict dictatorship and that the government depended largely on its people to obey its orders, to lead the revolution. Stalin wanted people to be afraid of him, so they would not go against him or disobey him, he had to do this by scaring his people, and this would lead the Russian people to think the same way Stalin did and agree with every word in fear of their own lives. Stalin put this fear into place by introducing 'Purges,' anyone who opposed him would be killed. He had ordered secretly for many Bolsheviks to be killed, and Trotsky, Bukharin, Zinoviev and Kamenev were some of which were murdered. ...read more.

Lenin was determined to make a communist country. 'In the villages the peasant will not give grain to the Bolsheviks because he hates them... People are arrested daily and kept in prison for months without trial' This was said a British businessman, this is unlikely to be reliable as it would be hard for him to create any profit with what was happening, also the Britain and Russia didn't like each other very much so the British business man could have had bad views on the country to start of with. War Communism helped Lenin create the Soviet Union as he needed to win the War so helping the Bolsheviks got Russia to win the War. However, things changed after the war and the new economic policy was introduced. They were brought out of communism and were able to make a profit. This was important because this when people started to trust Lenin again and helped him to go on to create the Soviet Union. Lenin dressed like a typical worker, by doing this Lenin was becoming one of them and he gained the trust of the workers, Lenin was almost brainwashing them to support him by acting like he was inspirational and acted like an ordinary man. This could be seen in the times after Lenin died in 1924, 'He is not one of the gentlefolk, he is one of us,' this shows how clever Lenin was, and how he had thought about getting people on his side. ...read more.

To Conclude I think even though Lenin did influence the society in a big way, Stalin was still more important socially in creating the Soviet Union; this is because Stalin took supreme control in making sure everything was monitored in order to praise him. This was important as he needs the support of the public for his regime to continue, making sure that all the Russian people could think of was how 'great' Stalin was ensured this, and made them believe that everything Stalin did was for them. Stalin changed the Russian society, even though millions of people were dying, all the praise that was towards Stalin influenced the people to only think positively of him and think that the purges were nothing to do with him. It was important in the creation of the Soviet Union as it helped him gain control and do as he pleased to have made the Soviet Union as strong as it is. Conclusion 'Stalin's excesses were tempered by his foresight.' Overall, I think that Stalin was much more important than Lenin because of the decisions he made and how he came about them. I think the quote above proves why Stalin was more important in creating the Soviet Union, he was prepared to make decisions based on the future and how that would affect the country, while Lenin only thought about how his policies would affect the industry in the current time. ?? ?? ?? ?? 1 ...read more.