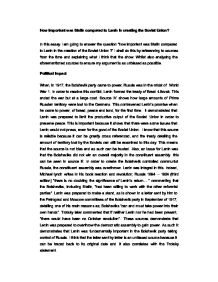 How important was Stalin compared to Lenin in creating the Soviet Union?

How important was Stalin compared to Lenin in creating the Soviet Union? In this essay I am going to answer the question "how important was Stalin compared to Lenin in the creation of the Soviet Union?" I shall do this by referencing to sources from the time and explaining what I think that the show. Whilst also analysing the aforementioned sources to ensure my argument is as unbiased as possible. Political Impact When, in 1917, the Bolshevik party came to power, Russia was in the midst of World War 1. In order to resolve this conflict, Lenin formed the treaty of Brest-Litovsk. This ended the war but at a large cost. Source 'A' shows how large amounts of Prime Russian territory were lost to the Germans. This contravened Lenin's promise when he came to power, of bread, peace and land, for the first time. It demonstrated that Lenin was prepared to limit the productive output of the Soviet Union in order to preserve peace. This is important because it shows that there were some issues that Lenin would not press, even for the good of the Soviet Union. I know that this source is reliable because it can be greatly cross referenced, and the treaty detailing the amount of territory lost by the Soviets can still be examined to this day. This means that the source is not bias and as such can be trusted. Also, an issue for Lenin was that the Bolsheviks did not win an overall majority in the constituent assembly this can be seen in source E. In order to create the Bolshevik controlled communist Russia, the constituent assembly was overthrown. Lenin was integral in this. Indeed, Michael lynch writes in his book reaction and revolution; Russia 1894 - 1924 (third edition) "there is no doubting the significance of Lenin's return..." commenting that the Bolsheviks, including Stalin, "had been willing to work with the other reformist parties". ...read more.

Stalin, conversely, took a different approach. Russia was greatly less developed than Britain, Germany and The USA when Stalin took over. However, through communist techniques and scare mongering he managed to vastly improve the Soviet Union. This was a vastly different approach to Lenin's NEP, and I think demonstrates how important Stalin was, because of his brutality, effective in massively improving the economy of the USSR. As such I think that Stalin is slightly more important in terms of economic decision making, because, although he gained control of the USSR at a time where there were no major issues, he managed to transform it using only communist ideology and brutality in the implementation of this, The foresight of this approach is now more evident, because Stalin preserved the communist ideals which defined the soviet Union, and as such his results were far superior. I do think that Stalin followed an Idea set up by Lenin, in war communism, but I think that Stalin was better prepared to deal with this. Although the reason for this preparation could be the control afforded to him after Lenin's death. Overall, I think that Lenin was only effective because of the techniques that he implemented. As such, I think that Stalin's overall effect was more drastic, and Stalin also caused the effect much more rapidly than Lenin had during his time. Social One of Lenin's largest problems was his opponents. The use of the Cheka meant that many of Lenin's opponents could be easily dealt with. Also, it became illegal to be a counter-revolutionary. According to official archive statistics, 7068 people were killed for this reason. This demonstrates how Lenin's Cheka was effective and demonstrates Lenin's relentless efforts to ensure that Russia stayed communist. This is important because it demonstrates that without Lenin, it is possible that communism would not have continued. I feel that this is unlikely to be bias because they were not published statistics which were likely be doctored, to raise public opinion on this issue, these were official archive figures, that no-one except those in charge were supposed to see. ...read more.

demonstrated active attempts to extend the reach of communism and as such improve the USSR, rather than the natural spread of communism favoured by Lenin. I think that this was important to ensure more land and more workers could be gained from Eastern Europe, and as such the USSR was improved greatly. This I think is outweighed by the requirement of Lenin's effect to overthrow the provisional government and to begin a communist government. Without this, the USSR would never have been formed, and all the achievements of Stalin would never have occurred. Because, even if he had gained power, Stalin would not have inherited control of a people he could dominate so easily, and most of his methods would not be effective in a democratic situation. As such, politically I think that Lenin was more important that Stalin. Socially, I think that Stalin was more important than Lenin. This is because Lenin did not effectively deal with opposition. This mean's that often his policies were questioned and took longer to become effective. However, Stalin initiated purges of the Party so that any opposition would be destroyed. This had an undesirable side effect of removing, and often killing, many innocent people. My opinion of this is that it was necessary to ensure that communism functioned at full efficiency and the USSR became one of the most advanced nations in the World. As such, I think that Stalin was more important t in the creation of the Soviet Union than Lenin. Overall, I think that Stalin was marginally more important than Lenin because of the decisions he made and policies he supported. This is also a view shared in Stalin and the Soviet Union by Jim grant, writing that "Stalin's excesses were tempered by his foresight." I think this demonstrates the Reason that Stalin was more important than Lenin. He was prepared to make decisions based upon their implications in the future, whereas Lenin was more concerned with their immediate repercussions. ?? ?? ?? ?? ...read more.