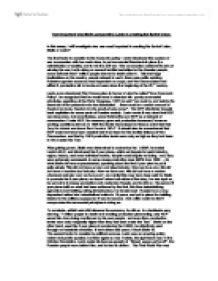 `How important was Stalin compared to Lenin in creating the Soviet Union In this essay, I will investigate who was most important in creating the Soviet Union, Stalin or Lenin? The first factor to consider is the Economic policy. Lenin introduced the system of war communism with two main aims, to put communist theories into place (i.e. redistribution of wealth), and to win the civil war. War communism achieved its aim of winning the war, but in doing so caused terrible hardships for the Russian people, some estimate that 7 million people starved to death under it. This had huge implications on the country, people refused to work, there was public uprising. Russia's agrarian economy was dependent on crops, and War Communism had stifled it, production fell to levels not seen since the beginning of the 20th century. Lenin soon abandoned War Communism in favour of what he called "New Economic Policy", he recognized that he would have to abandon his purely communist principles, speaking at the Party Congress, 1921 he said "we must try and satisfy the demands of the peasants who are dissatisfied... there must be a certain amount of freedom to trade, freedom for the small private owner". ...read more.

One of Lenin's first moves after taking power was to negotiate Russia's withdrawal from the war. The Brest-Litovsk Treaty did this, but on highly embarrassing terms (e.g. Russia lost ~90% of its coal mines), Lenin gambled on Germany losing so that he could reclaim the land, a shrewd political manoeuvre and one that paid off, but remember it was in fact Trotsky who negotiated the treaty. Lenin also showed his political strength in early 1918, elections had been held, and when the Constituent Assembly opened, the Socialist Revolutionaries were the biggest party, so Lenin promptly sent I the Red Army to shut it down, this move showed people that he and he alone was firmly in control, without this kind of control, the USSR would have crumbled. Stalin was very intelligent, he took on many boring, but important political offices within the party so that he could place his supporters into important positions, and transfer opponents to less important posts where they could do little harm. He took on his opponents one by one. He once took Bukharin's side in an argument to get rid of Trotsky, then argued the same points Trotsky had to get rid of Bukharin. ...read more.

The Kronstadt sailors stated in their official statement that they 'hoped for freedom' and that 'the result has been greater slavery', they wanted to 'free the workers and the Soviets from the Communists'. This meant that Lenin had to abandon the policy of War Communism and put in place a new economic policy. On the other hand, War Communism was extremely crucial in creating the Soviet Union. Had Lenin, not led the country into winning the war, he would have kept the policies of 'War Communism' and many more people and supporters would have died (turning a lot of people against him). Also, there would have been a possibility that Russia would have been taken over by other Countries, as 'War Communism' led the people to be venerable (as many of them were starving). Also, without War Communism and a lot of people dead because of it, Lenin would not have thought about creating a new economic policy (which caused many people to believe that Lenin betrayed the communist belief) that would benefit his people. Furthermore, the Kronstadt would have made 'a third revolution' and freed the 'Soviets from the Communists'. Without War Communism, Lenin would not have saved his peoples' belief in him. ...read more.