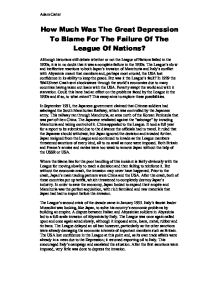 How Much Was The Great Depression To Blame For The Failure Of The League Of Nations?

How Much Was The Great Depression To Blame For The Failure Of The League Of Nations? Although historians still debate whether or not the League of Nations failed in the 1920s, it is in no doubt that it was a complete failure in the 1930s. The League's slow and ineffective reactions to both Japan's invasion of Manchuria and Italy's conflict with Abyssinia meant that members and, perhaps most crucial, the USA lost confidence in its ability to keep the peace. But was it the League's fault? In 1929 the Wall Street Crash sent shockwaves through the world's economies due to many countries having taken out loans with the USA. Poverty swept the world and with it starvation. Could this have had an effect on the problems faced by the League in the 1930s and if so, to what extent? This essay aims to explore these possibilities. ...read more.

But without the economic crash, the invasion may never have happened. Prior to the crash, Japan's main trading partners were China and the USA. After the crash, both of these countries put up tariffs, which threatened to completely destroy Japan's industry. In order to save the economy, Japan looked to expand their empire and Manchuria was the perfect acquisition, with rich farmland and raw materials that Japan had had to import before the invasion. The League's second crisis of the decade came in January 1935. Italy's fascist leader Mussolini was looking, like Japan, to solve his country's economic problems by building an empire. A dispute between Italian and Abyssinian soldiers in Abyssinia led to a full-scale invasion of Abyssinia by Italy. The League was once again called upon and once again acted slowly, although it imposed arms, loans, metal, rubber and tin bans. The League delayed an oil ban however, particularly as the other sanctions were already damaging the economic interests of important members such as Britain. ...read more.

In conclusion, although the League of Nations was flawed in very basic ways, the dilemmas it faced in the 1930s were of tremendous importance as they both involved large members of the League and they both had the possibility of escalating into a larger war, which they did eventually in 1939. The only reason the Manchuria and Abyssinia crisis even happened was down to the Depression. Both Italy and Japan were searching for answers to their economic problems in building empires. As well as this the League's response was affected by the economic crash. Countries were wary of imposing import/export bans because of the fragile economic state; they couldn't afford to be losing trade partners. If the Wall Street Crash had never happened the 1930s might have continued like the 20s with small-scale incidents. The League might even have existed today, as WWII would not have happened. The Depression hammered the final nail into the League of Nation's coffin and caused the rise of the Nazis and, therefore, WWII. Adam Carter ...read more.