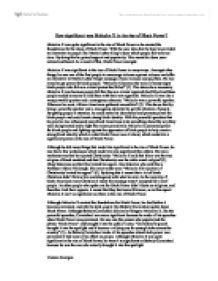 How significant was Malcolm X in the rise of Black Power?

Malcolm X promoted power for black people and fighting against the oppression of black people to help create a strong black identity which is what Black Power was all about, which made him a significant person in the rise of Black Power. Although he did many things that made him significant in the rise of Black Power, he also had a few weaknesses which made him less significant than others. His main weakness was that he rejected Christianity. "Malcolm X said that Islam was the true religion of black mankind and that Christianity was the white man's religion"(3). Many historians say that this limited his appeal. One historian who said this is Professor Adam Fairclough. ...read more.