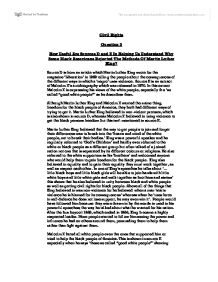 How Useful Are Sources D and E In Helping Us Understand Why Some Black Americans Rejected The Methods Of Martin Luther King?

Civil Rights Question 3 How Useful Are Sources D and E In Helping Us Understand Why Some Black Americans Rejected The Methods Of Martin Luther King? Source D is from an article which Martin Luther King wrote for the magazine 'Liberation' in 1959 telling the people about the consequences of the different ways in which a 'negro' uses violence. Source E is an extract of Malcolm X's autobiography which was released in 1970. In this extract Malcolm X is expressing his views of the white people, especially the 'so called "good white people"' as he describes them. Although Martin Luther King and Malcolm X wanted the same thing, freedom for the black people of America, they both had different ways of trying to get it. Martin Luther King believed in non-violent protests, which is also shown in source D, whereas Malcolm X believed in using violence to get the black persons freedom but this isn't mentioned in source E. Martin Luther King believed that the way to get people to join and forget their differences was to break into the 'hearts and mind of the white people, not to break their bodies.' ...read more.

not believe that any white people were good or were willing to welcome as he thought they 'weren't considered to be part of them' referring to the white people. Malcolm X believed that white and black people will always be enemies and he also referred to whites as "devils" who had been created in a misguided breeding program by a black scientist, and predicted the inevitable (and imminent) return of blacks to their natural place at the top of the social order in some of his speeches clearly showing his hatred towards white people. Malcolm X also believed that violence could not be avoided and so encouraged people to use violence against others because the whites used violence against them (the KKK). He also encouraged people to carry guns and other weapons with them incase they were attacked and to also take control of their own communities. Some people might have followed Malcolm X as his way provided an outlet for black Americans anger towards the white people and the society that they lived in. So through comparing the ideals and lives of both these influential men, we can see that they both have a same idea but methods and desires for change were different in a great number of ways. ...read more.