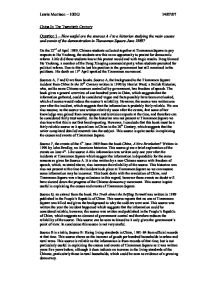 How useful are the sources A-I to a historian studying the main causes and events of the demonstration in Tiananmen Square June 1989?

China In The Twentieth Century Question 1 - How useful are the sources A-I to a historian studying the main causes and events of the demonstration in Tiananmen Square June 1989? On the 22nd of April 1989, Chinese students collected together at Tiananmen Square to pay respects to Hu Yaobang, the students saw this as an opportunity to protest for democratic reform. Little did these students know this protest would end with tragic results. Deng blamed Hu Yaobang, a member of the Deng Xiaoping communist party, when students protested for political reform. Due to this he lost his position in the government but still remained in the politburo. His death on 15th April sparked the Tiananmen movement. Sources A, F and G are from books. Source A, the background to the Tiananmen Square incident from China in the 20th Century written in 1990 by Harriet Ward, a British Historian, who, unlike some Chinese sources controlled by government, has freedom of speech. The book gives a general overview of one hundred years in China, which suggests that the information gathered, could be considered vague and facts possibly have been overlooked, which of course would reduce the source's reliability. ...read more.

Sources E and D are both sources from newspapers. Source E: The events of 4th June 1989 from a report in the Sunday times in 1989, a British newspaper. The reporter has freedom of speech and cannot be controlled by the government unlike some Chinese sources. This is a primary source and therefore reliable due to the fact that it is an eyewitness report by the reporter, Louise Branson, who was in Beijing at the time. The information is stark and certainly anti-Chinese government, and only gives one side of the story, which could be considered as reducing the report's reliability. This is a very useful source in showing the events that took place at Tiananmen Square. Source D: The students believe they have won from Tiananmen, The rape of Peking 1989, a book published by the British newspaper, The Independent. This source is very useful in explaining the causes and events of Tiananmen Square. It is reliable due to the fact that it was written the same year as the incident; this suggests that the information is correct and up to date. The Independent, has a reputation for well researched, fair, and unbiased reporting. ...read more.

This is a useful version of the Tiananmen Square incident because a reliable British newspaper has published an objective report of events. Source E is an extract from a report in a British Newspaper, The Sunday Times (4th June 1989). It differs from source D because the reporter, who is British, was in Beijing at the time of the Tiananmen Square events. The report is most likely unbiased because it is written by a reporter from a western society. Its value is increased because it is an eye witness report. Source F, an extract from China, A New Revolution (1990) written by an American Historian, John Bradley. It is similar in sentiment to source D because it is against the Chinese government. It is a second hand account because he was not there at the time the events took place. His overall view is that the events that took place in Tiananmen Square have had a detrimental effect on the Chinese Democracy movement. Source G, an extract from the book The Truth about the Beijing Turmoil differs from sources D-F because it was written and published in the People's Republic of China. The book toes the official Chinese Communist Party line. Protest was effectively ended and although China has modernised and, to some extent westernised, democracy is as far away as ever. Lewis Morrison - 10DG 14/07/07 ...read more.