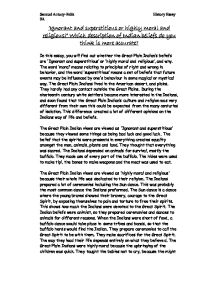 ‘Ignorant and superstitious or highly moral and religious?’ Which description of Indian beliefs do you think is more accurate?

In this essay, you will find out whether the Great Plain Indian’s beliefs are 'Ignorant and superstitious’ or ‘highly moral and religious’, and why. The word ‘moral’ means relating to principles of right and wrong in behavior, and the word ‘superstitious’ means a set of beliefs that future events may be influenced by one's behaviour in some magical or mystical way. The Great Plain Indians lived in the American desert, and plains. They hardly had any contact outside the Great Plains. During the nineteenth century white settlers became more interested in the Indians, and soon found that the Great Plain Indian’s culture and religion was very different from their own this could be expected from the many centuries of isolation. This difference created a lot of different opinions on the Indians way of life and beliefs.

The Great Plain Indian views are viewed as 'Ignorant and superstitious’ because they viewed some things as being bad luck and good luck. The belief that the spirits were presents in everything creates equality amongst the men, animals, plants and land. They thought that everything was sacred. The Indians depended on animals for survival, mostly the buffalo. They made use of every part of the buffalo. The hides were used to make tipi, the bones to make weapons and the meat was used to eat.

The Great Plain Indian views are viewed as ‘highly moral and religious’because their whole life was dedicated to their religion. The Indians prepared a lot of ceremonies including the Sun dance. This was probably the most common dance the Indians preformed. The Sun dance is a dance where the young braves showed their bravery, courage to the Great Spirit, by exposing themselves to pain and torture to free their spirits. This shows how much the Indians were devoted to the Great Spirit.The Indian beliefs were animist, so they prepared ceremonies and dances to animals for different reasons. When the Indians were short of food, a buffalo dance would take place in some tribes and bands, so that the buffalo herds would find the Indian. They prepare ceremonies to call the Great Spirit to be with them. They make sacrifices for the Great Spirit. The way they lead their life depends entirely on what they believed. The Great Plain Indians were highly moral because the upbringing of the children was quick. They taught the babies not to cry, because the might alert the enemies. They believed that it was right to go to war, and fight over land. They thought it was right to scalp the enemies and keep the scalp as a trophy.

It can be argued that specific method was used to capture the land that was owned by the Indians. If the settlers thought that the Indian belief system and religion was based on superstitions and ignorant thoughts, then the settlers had good reason to seize the land because leaving such fertile and ripe land for the Indians, who are thought to be too dumb to actually take care of it, then it is only justifiable, that it should be used by the normal white settlers. These thoughts are only propaganda, but this is not the only reason. The other reason is that Indians religion is a highly disputable subject.

It can be argued that the Indian belief is more ‘highly moral and religious’ than it is ‘ignorant and superstitious’. This is because thereligious beliefs of the Indians, living in the Great Plains, is based on superstition, is arguably isn’t correct because superstition is a belief in the supernatural, which is against the laws of nature.