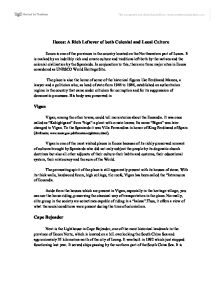 Ilocos: A rich leftover of both Colonial and Local Culture

Ilocos: A Rich Leftover of both Colonial and Local Culture Ilocos is one of the provinces in the country located on the Northwestern part of Luzon. It is marked by an indelibly rich and ornate culture and traditions left both by the natives and the colonial civilization by the Spaniards. In conjunction to this, there are three major sites in Ilocos considered as UNESCO World Heritage Site. The place is also the home of some of the historical figures like Ferdinand Marcos, a lawyer and a politician who, as head of state from 1966 to 1986, established an authoritarian regime in the country that came under criticism for corruption and for its suppression of democratic processes. ...read more.

The permeating spirit of the place is still apparently present with its houses of stone. With its thick walls, hardwood floors, high ceilings, tile roofs, Vigan has been called the "Intramuros of Ilocandia. Aside from the houses which are present in Vigan, especially in the heritage village, you can see the horse-riding, preserving the classical way of transportation in the place. Normally, elite group in the society are sometimes capable of riding in a "kalesa".Thus, it offers a view of what the social conditions were present during the time of colonialism. Cape Bojeador Next is the Lighthouse in Cape Bojeador, one of the most historical landmark in the province of Ilocos Norte, which is located on a hill overlooking the South China Sea and approximately 35 kilometres north of the city of Laoag. ...read more.

It is named Gameng, an Ilocano word meaning treasure, representing the wealth of Ilocos Norte. There, you could find artifacts which the great majority of items were collected in the field. Apparently, the museum is settled in an ancestral house showing how, in older times, looked like inside and out. Relatively, modern houses have derivatives from the ancestral house. It also showed the different utensils used before commonly used in the house like the ladle, flat iron and etc. Santa Maria Church In 1993, it is considered by UNESCO a World Heritage site, which said to have the universal importance which must be valued for human hood. It is located in Santa Maria, Ilocos Sur and is one of the four Baroque Churches in the Philippines ...read more.