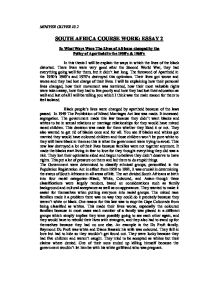 In What Ways Were The Lives of Africans changed by the Policy of Apartheid in the 1950's &amp; 1960's

MINIVER OLIVER 10.2 SOUTH AFRICA COURSE WORK: ESSAY 2 In What Ways Were The Lives of Africans changed by the Policy of Apartheid in the 1950's & 1960's In this thesis I will be explain the ways in which the lives of the black distorted. There lives were very good after the Second World War, they had everything going well for them, but it didn't last long. The foreword of Apartheid in the 1950's 1960's and 1970's destroyed this optimism. Their lives got worse and worse and they had lost charge of their lives. I will be explaining how their personal lives changed, how their movement was restricted, how their most valuable rights were taken away, how they had to live poorly and how they had lost their education as well and last of all I will be telling you which I think was the main reason for them to feel isolated. Black people's lives were changed by apartheid because of the laws passed. In 1949 The Prohibition of Mixed Marriages Act law was made. It increased segregation. The government made this law because they didn't want blacks and whites to be in sexual relations or marriage relationships for they would have mixed raced children. This decision was made for them whether they liked it or not. They also wanted to get rid of blacks once and for all. You see if blacks and whites got married they would have coloured children and those children won't be pure white to they will have black in them so this is what the government were trying to avoid. This new law destroyed a lot of their lives because families were not together anymore. It made the blacks start living in fear to love for they thought everything they did was a risk. They lost their optimistic sided and begun to believe they didn't deserve to have rights. ...read more.

This made their lives worse because they wouldn't have anyone to think of ideas to get them back on their feet and they had no one to stand up for who they were anymore. They had to do every thing they were told for they had no hope or strength to do anything. Detention without trail was initially used on a great size throughout the Sharpeville disaster of 1960, when 11,700 citizens were locked up under the condition of urgent situations. Individuals alleged of intimidation possibly will be held for up to thirty days in the first case in point, and for longer if the Minister of Justice provided his endorsement. This Imprisonment without examination made their lives worse because it gave the police ample of chance for viciousness and torment to them. At this time smallest amount 69 people had died in police detention and they blacks who lost their loved their loved ones were told lies about causes of the death like Suicide, falling out of a tenth floor window or that he slipped in the shower. Their lives got worse because they were battered and told not to sleep. A lot of enemies of the government died in mysterious situations. It was common that the police murdered them because of useless reasons. Their lives got worse because every little thing they did was a charge against them so it made them fell afraid that they would end up dead and because they didn't want to leave their families they just stayed put. It was reasons like if a person refuses to do something or even if a policeman does not like that person he would get killed. Newspapers weren't allowed to mention forbidden individuals and those significant of the government found themselves in problems. This made their lives worse as well because without the newspaper people weren't able to know what was going on in the world. ...read more.

Without their rights they were like robots being operated to do all sorts of things for money and power. They had been taken over and they had no say in it because they didn't have the power. They had to live like animals because they had no rights. Because I have Human rights like education right I'm here today but they did have a choice they had to learn how to be a farmer and they had to accept life the way it was their. I think the entire paragraphs link. I think the Personal Lives paragraph was there so it could make the blacks fell weak and like they couldn't go on without close people next to them. It was also to make the white people's lives easier. Now that all the blacks self confidence was gone the government decided on stopping them from going anywhere without permission and this was also to their advantage that they would get more slaves to work for them in this way (when they found their passes out of order), I also think that some of the blacks were probably trying to look for their families but with this new low it was impossible, so they lost their hope and courage and gave up. After all this the whites still wanted control over the blacks so they sent them to the homelands were many died and suffered a lot. They then took away their human rights which was possibly all they had left, they took away black nationalism which made them feel they had nothing to look forward to in life because they didn't even know their heritage, I think they didn't really care any more and that was what the government wanted they had them right under their wing to do anything they told them and act the way they told them, they had total control over the blacks. And with their education taken away I don't think they had any idea about what was going on. ...read more.