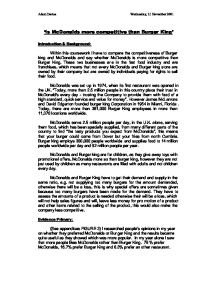 'Is McDonalds more competitive than Burger King' Introduction & Background: Within this coursework I have to compare the competitiveness of Burger king and McDonalds and say whether McDonalds is more competitive than Burger King. These two businesses are in the fast food industry and are franchises, which means that not every McDonalds and Burger king store are owned by their company but are owned by individuals paying for rights to sell their food. McDonalds was set up in 1974, when its first restaurant was opened in the UK. "Today, more than 2.5 million people in this country place their trust in McDonald's every day - trusting the Company to provide them with food of a high standard, quick service and value for money". However James McLamore and David Edgerton founded burger king Corporation in 1954 in Miami, Florida. Today, there are more than 361,000 Burger King employees in more than 11,370 locations worldwide. McDonalds serve 2.5 million people per day, in the U.K. alone, serving them food, which has been specially supplied, from many different parts of the country to find "the tasty products you expect from McDonalds", this means that your burger could come from Dover but your fries from north Cumbria. Burger king employs 300,000 people worldwide and supplies food to 14 million people worldwide per day and 92 million people per year. ...read more.

Analyse: However people who like both is not a category so these people are unable to comment on their favourite place to eat. From sales figures you cannot really say which is more competitive because making the most profit is only one aspect to consider when reviewing how competitive a business is, it has more to do with the public relations that, that company has with its customers. E.g. the 4 P's; price, promotion, place and product. So for McDonalds to make more sales than burger king, being competitive they have to offer the best, they do this in many ways. (For more detail see appendices FIGURE 5) In general you would think the company with the best food, prices and service would be the most competitive as it is beating the other companies standards. In some cases employees have been in terrible conditions such as this ex employee of burger king, who now suffers badly from acne and his now a disgruntled ex-employee. As well as the standards for the customer the standards for fast food employees also has to show the competitiveness of both companies, so in this case employees were not treated fairly saying that burger king has worse standards than McDonalds however this is only a case study which occurred in one restaurant and not the entire chain of Burger Kings. ...read more.

Promotion: to promote products companies often do buy one get one free or 2 for a pound. This technique often gets customers however customers start to buy two of a product for more money because there is a deal on, when they only want one of the product, this cons the customer into buying two of a product. As well as this they have advertisements with pictures of food that looks very filling, tasty, and mouth-watering, this attracts customers to the store. Place: the location of the store is very important, in more cases than not the stores are situated in the middle of the town or in popular locations, this is the case in stoke on Trent and in others places that I have seen. Both stores are situated close to each other so; one restaurant is not used more than the other because of convenience. Product: both McDonalds and burger king regularly change their products from one meal to an other. Even when their product is changed they are always of the same quality as the last and more often than not are high sellers. Meals are always to best standards and if not money will be refunded and food replaced. ?? ?? ?? ?? Adam Davies Wednesday, 21 November 2001 ...read more.