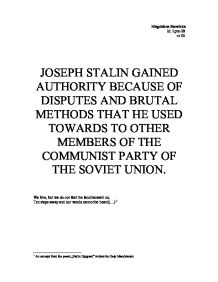 JOSEPH STALIN GAINED AUTHORITY BECAUSE OF DISPUTES AND BRUTAL METHODS THAT HE USED TOWARDS TO OTHER MEMBERS OF THE COMMUNIST PARTY OF THE SOVIET UNION.

Magdalena Baranska kl. I pre-IB nr 01 JOSEPH STALIN GAINED AUTHORITY BECAUSE OF DISPUTES AND BRUTAL METHODS THAT HE USED TOWARDS TO OTHER MEMBERS OF THE COMMUNIST PARTY OF THE SOVIET UNION. We live, but we do not feel the land beneath us, Ten steps away and our words cannot be heard(...) 1 Joseph Stalin was born in 1887 in Georgia in a very poor family. He gained authority in USRR and became almighty leader whose dictatorship was characterized by internal and external terror which took life away from few dozen millions innocent people. His transformation form a modest, fighting with evil communist into self-ruling leader of huge country consisting of few nationalities, is rich in offences and murders. Stalin owed his position to his implacable and uncompromising personality, shaped by terrible family relationships, especially with a father and over 10 years spent on exile. This events caused him to be hard, impervious to suffer loner who is excessively suspicious and not able to trust anybody. Stalin is considered to be one of the most ruthless historical form. He had no qualms in applying repressions and committing crimes (so called 'stalin's methods) which helped him to triumph in politician career and find himself on the top. Initially, he disposed of all his enemies in the Communist Party of The Soviet Union who paved his way for raising to indivisible and unlimited power. ...read more.

In the process of XVII Reunion of a Party, Smirnov, Tolmatchov and Ejsmont 4 was talking Kirov into taking over General Secretary. He disagreed but it did not help him to stay alive. Along with this proposition, he was doomed to be killed... He managed to shun death in odd accidents for several times. Finally, he was gun down by Leonid Nikolajev, who probably receive command from Stalin. Fear and envy were two main motives of this crime. Envy of popularity in party and fear of fact, that there is someone who may overthrow the power of Stalin and be a hindrance to his climbing in USRR. On the XVII Reunion Stalin finally understood that revolutionaries had been fighting for so long not to defer now to one person. And the only way of coping with those who were impossible to subjugate, was to eliminate them forever. The most serious Stalin's opponent was Leon Trotsky. They were competing for almost everything, especially for Lenin's favour, whose support was tantamount to triumph. For long time Trotsky was one of the Mensheviks- option opposite to Bolsheviks. However, in 1917 he joined in Bolsheviks and explained his decision by similarity between his and Lenin's views on many issues, like the case of bourgeoisie, Provisional Government, international revolution and war. Lenin admitted him to a Party because of his military and oratory abilities and to prove Russian nation that Bolsheviks are not kind of closed sect but they are eager to admit people who are characterized by features essential for their vision of revolution. ...read more.

Nowadays none of descendtants of Stalin uses his surname. What is more, it is hardly possible to find a person who misses him or is sorry for his lot. Modern society is conscious of his repressions and crimes because of numerous investigations in his case that demonstrated how brutal Stalin was. Number of victims does not lie- it is estimated that Stalin was behind death of dozens of millions of people. Stalin deprive USRR of leadership, leaving only handful of faithfully serving him people. In 40ties of XX centaury, he slew whole Central Committee existing since Lenin chose such makeup ( besides Kirov and Trotsky, Stalin dispose also of such outstanding individuals like Kamenev, Zinoviev and Bucharin). He removed all inconvenient opponents and restored system called 'Stalinism' in which everybody and everything was under total control, economy was based on exact planning of goods and there was used brutal crushing of all workers' action and the use of slander and historical distortion against other left groups. He liquidated those who was able to think on their own and had heads full of new ideas. Along with their death, numerous reforms and conveniences passed away... 1 An excerpt from the poem "Stalin Epigram" written by Osip Mandelstam 2 They did not agree in minor affairs as agrarian issue- Lenin wanted nationalization of lands after revolution, while Stalin was for splitting it for peasants. 3 The true surname of Stalin 4 They were thrown out from a party by Stalin a year before XVII Reunion, so this was probably kind of revenge. ?? ?? ?? ?? ...read more.