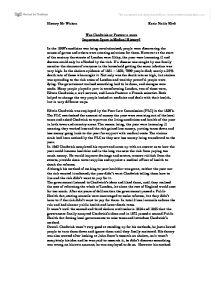 Was Chadwick or Pasteur a more Important figure in Medical History? In the 1800's medicine was being revolutionised; people were discovering the causes of germs and others were creating solutions for them. However at the start of the century the streets of London were filthy, the poor were becoming ill and doctors could only be afforded by the rich. If a disease was caught by one family member the chances of everyone in the household getting the same infection was very high. In the cholera epidemic of 1831 - 1832, 7000 people died; nearly a 50% death rate of those who caught it. Not only was the death rate so high, but cholera was spreading to the rich areas of London and wealthy powerful people were dying. The government realised something had to be done, and changes were made. Many people played a part in transforming London, two of these were, Edwin Chadwick; a civil servant, and Louis Pasteur: a French scientist. Both helped to change the way people looked at medicine and dealt with their health, but in very different ways. ...read more.

It wasn't until the second and third cholera outbreaks in 1854 and 1865 that the government finally accepted Chadwick's ideas and in 1875 passed a second Public Health Act forcing local governments to raise taxes and introduce Chadwick's method. Overall Chadwick wasn't very good at standing up for his methods, he just allowed people to turn them down and ignore them until they finally mattered. His theory was also created after looking at John Snow's research on cholera, so it wasn't completely his idea and he was paid to research it, he didn't discover something was wrong on his own account; he was employed to do so. However his method did actually work and once people began to use it the poor became healthier and were soon back to work. The other man involved in the revolution in London was Louis Pasteur. Pasteur became interested in germs when a new microscope allowed him to look closely and study the behaviour of the micro-organisms. He was then asked by a brewing company to take a look at their beer; the company were wondering why the beer was going off and not staying fresh. ...read more.

However, like Chadwick, Pasteur was asked to look into something, he didn't come across it on his own. Although he did create the theory himself and then went on to develop it. After judging both men on their achievements and the amount of lives they saved in the long run, I believe that Pasteur made a greater contribution to medicine than Chadwick. However the effect Chadwick had on the London society in the 1800's was phenomenal as he completely changed people's attitudes to cleanliness and general health. I think both men deserve acknowledgement for the changes the made to the world of science and medicine, but Pasteur did develop his ideas singlehandedly and then went on to create and prove many new theories about germs and their spread. He was also not afraid to stand up for his ideas when they were challenged whereas Chadwick allowed people to brush off his ideas and only use them when they desperately needed them. ?? ?? ?? ?? History Mr Wicken Katie Noble 9Sv6 ...read more.