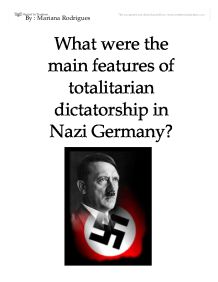 What were the main features of totalitarian dictatorship in Nazi Germany? Contents * A one party state: law and order in Nazi Germany * Cultural, racial and religious persecution. * Control of education * Hitler Youth Movements/Women * The Media, Censorship and Propaganda. A one party state: Law and order in Nazi Germany. Totalitarian state A totalitarian state is one where there can't be any rival parties or political debate; that all German citizens must serve and honour the state accordingly to the rules of the supreme leader (i.e. Adolf Hitler). The basic concept of the totalitarian state was best expressed as: "All within the state, nothing outside the state, nothing against the state." - Mussolini The SS The SS (Schutzstaffel) was led by Heinrich Himmler and it consisted of a group of highly trained Aryan men whose responsibility was to not only destroy but eradicate any and every member of the opposition towards the Nazis.The group was first formed in 1923, as a company of the SA who were given the task of protecting senior leaders of the Nazi Party at rallies, speeches, and other public . They wore black uniforms with a skeleton's head on their hats, and their symbol was the double S-rune. "The SS was at the forefront of implementing the most radical and terrible policies of Nazi Germany" The Gestapo The Gestapo was the secret state police led by Reinhard Heydrich. It was a great, powerful force feared by many German citizens and even officials! In fact, that was one of the purposes of the Gestapo, to frighten German citizens so that they would report their friends and family to them, and once the Gestapo withheld anyone they could arrest them and send them to concentration camps without a trial or even an explanation! The army units within the Gestapo were taught many torture techniques, and were also taught many of the practices that German doctors in Dachau tested on the inmates of concentration camps. ...read more.

However, Hitler loathed the Catholic Church because he saw it as a "branch of the Jewish race" in fact, in 1938 Goebbels Nazi Minister of Propaganda, noted: "The Fuhrer is deeply religious, though completely anti-Christian. He views Christianity as a symptom of decay. Rightly so. It is a branch of the Jewish race... Both [Judaism and Christianity] have no point of contact to the animal element, and thus, in the end, they will be destroyed." This statement made churchgoers and clergy members started to rebel against Hitler and the Nazis and in 1941 Catholic Bishop Galen led a popular protest against the Nazi policies of killing mentally ill and physically disabled people, forcing the Nazis to temporarily stop. Hitler also tried to get all of the Protestant Churches to come together in one official Reich Church which would be lead by the Protestant Bishop Ludwig Muller, but many Germans still felt that they were truly loyal to the original Churches as opposed to the new state-approved ones. Control of Education Indoctrination of Children Indoctrination and the use of propaganda were to be a common practice in Nazi schools and the education system. From a young age, Children were taught the Nazi policies and told to worship the Fuhrer, basically they were brainwashed. Indoctrination became rampant in all subjects. At every opportunity, teachers were expected to attack the life style of the Jews which in the long term stimulated a sense of hatred towards the Jews in the mind of Germany children which coincidentally was precisely what Hitler wanted. Teachers in Nazi Germany Enforcing a Nazi curriculum on schools depended on the teachers delivering it. All teachers had to be seen by local Nazi officials and any teacher considered disloyal was fired immediately. All teachers had to be careful about what they said seeing as children were encouraged to inform the authorities if a teacher said something that didn't fit in with the Nazi's curriculum for schools. ...read more.

He made German culture more youth-oriented, and the Hitler Youth and the League of German Maidens were brought up properly and provided with fun activities. People were happier, more involved, it was almost as if the nation was whole again. Germans had restored hope and faith; they participated in ceremonies and rallies. It seemed as if the depression had finally worn off. However, things weren't as glamorous as they seemed; Hitler wasn't really the hero he appeared to be, he was a narcissistic dictator who was determined to implement his loathsome ideas and policies into Germany. It's is implausible to think how one man led to the genocide of the Jewish race let alone of many others too! Hitler persecuted his people in such a way that made the whole world question his humanity. The people of Germany in the time of the Nazis suffered, screamed and wept; it was a time of great depression for everyone, even Hitler's close acquaintances. How do we know this? If everyone was happy during the Nazi rule, there wouldn't have been people like Sophia Scholl, The Edelweiss pirates or Oscar Schindler; there wouldn't have been opposition let alone resistance! In conclusion, Germans did gained from the rule of the Nazis, but only in the short term, life was made a bit easier, unemployment decreased and a load was taken off their shoulders, but not for long because once Hitler took that weight off them, he put an even larger on. Adolf Hitler alongside with his insane policies and rules brought Germany pain, suffering and desperation. He wrecked the life of millions of Germans, destroyed millions of lives and traumatised thousands of people! The Final Solution was an inexplicable tragic event which left no words with which to be described, and the culprit of all this? Adolf Hitler and the Nazis. The people of Germany in the long term, which is what really counts, we truly unhappy and gained nothing from the rule of the Nazis except for misery, pain and despair. ...read more.