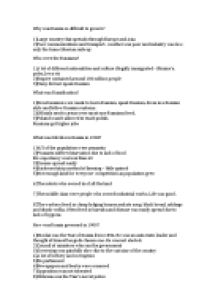 ï»¿Why was Russia so difficult to govern? 1)Large country that spreads through Europe and Asia 2)Poor communications and transport- weather was poor and industry was low- only the trans-Siberian railway. Who were the Russians? 1)A lot of different nationalities and culture illegally immigrated –Ukraine’s, poles, Jews etc 2)Empire contained around 130 million people 3)Many did not speak Russian What was Russification? 1)Non-Russians were made to learn Russian, speak Russian, dress in a Russian style and follow Russian customs. 2)Officials sent to areas were most non-Russians lived. 3)Poland wasn’t allowed to teach polish. Russians got higher jobs What was life like in Russia in 1900? 1)4/5 of the population were peasants 2)Peasants suffered starvation due to lack of food life expectancy was less than 40 3)Disease spread easily 4)Backward strip method of farming – little gained 5)Not enough land for everyone- competition as population grew 6)The nobels who owned ¼ of all the land 7)The middle class were people who owned industrial works. ...read more.

and the Liberals. 2)They all wanted the removal of the Tsar 3)They wanted freedom, elections, civil rights, and land to the peasants. 4)Terrorism and demonstrations were practiced Why did Russia explode in revolution in 1905? Economic problems- Developing its industry was introduced to change their backward agriculture into a modern industrializing one. Enormous amount of money was invested by the government- main source came from the Russian people Peasants had to pay heavy taxes industry grew rapidly in steel works 1902, there was a slump- many workers lost their job strikes and demonstrations began Starvation in the countryside Father Gapon created a survey of better working conditions Russo-Japanese war- Russia got itself involved In a conflict with japan in 1904 Prices rose in the cities food shortage due to the war Closure of factories high unemployment They were defeated by the Japanese in 1905 Bloody Sunday- st.petersburg was facing tension. ...read more.

Tsar Changes in the countryside Stolypin introduced reforms such as agriculture in order to produce more grain efficiently Peasant banks were set up to provide loans kulak class rose and were loyal to the government Production of grain increased war interrupted the reforms in 1914 a lot of poorer peasants were left unemployed and seeked jobs in the cities and countryside- the government mislead them to believing land was available along the trans-Siberian railway when they were actually purchased by rich nobels. Changes in the cities 1906-1914, industrial boom in Russia production increased by 100% working conditions improved little no health care, no safety and working hours increased 1912, strikes and demonstrations were common-place Goldfields in Siberia was another attempt of protests- 170 workers were killed Steps to revolution 1914-17 effects of the war effects of the war at home Tsarina and Rasputin in control Losing support the revolution begins- workers, international women?s day, Rodzianko The army takes side the tsar abdicates on march 15th ...read more.