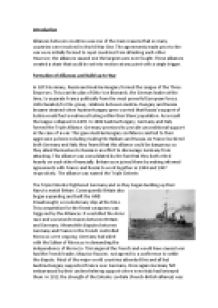 Outline the Role and Effects of Alliances in WW1

﻿Introduction Alliances between countries was one of the main reasons that so many countries were involved in World War One. The agreements made prior to the war were initially formed to repel countries from attacking each other. However, the alliances caused one the largest wars ever fought. These alliances created a chain that could be set into motion at any point with a single trigger. Formation of Alliances and Build up to War In 1873 Germany, Russia and Austria-Hungary formed the League of the Three Emperors. This was the plan of Otto Von Bismarck, the German leader at the time, to separate France politically from the most powerful European forces. Unfortunately for the group, relations between Austria -Hungary and Russia became strained when Austria-Hungary grew worried that Russia?s support of Serbia would fuel a mutinous feeling within their Slavic population. As a result the league collapsed in 1878. In 1882 Austria-Hungary, Germany and Italy formed the Triple Alliance. Germany promised to provide unconditional support in the case of a war. This gave Austria-Hungary confidence and led to their aggressive policies including rivaling the Balkans and Russia. ...read more.

They gave Serbia a deadline of 48 hours or their diplomatic relations would break down. With the backing of Russia, Serbia felt assured enough to only partially accept the demands causing Austria-Hungary to declare war on Serbia. As part of the Triple Alliance, Germany backed Austria-Hungary. However, due to poor communication Germany and Austria-Hungary had made different assumptions of how their forces would be split. This led to the Austria-Hungary forces having to be divided between the Russian border and Serbian border. Meanwhile Germany implemented the Schlieffen Plan and attacked France bringing about Belgium and Britain?s involvement in the war. However, this plan had not counted upon the involvement of Russia. Russia attacked Germany while they were attacking France leaving the attack as a stalemate. Austria-Hungary and Germany were also counting on the involvement of Italy but were dismayed to find that Italy would not assist them. Italy?s reasons were that Austria-Hungary had taken the offensive in the war despite the fact that their Alliance was a defensive alliance. Italy later joined the Allies rather than the Central Powers (Germany and Austria-Hungary). Bulgaria and the Ottoman Empire joined the German-Austrian alliance in 1914 and 1915 to form the Central Powers. ...read more.

* Belgium were occupied by Germany for most of the war. They sent a small force to the Eastern Front and their African Colonies participated. The majority of their Army retreated to France and fought on the Western Front. * Portugal joined the war in 1916. They suffered very heavy losses during the war with around 7,000 of their army soldiers killed. Portugal primarily fought in Africa and on the Western Front. * China did not have an army yet it supported the allied cause. The Chinese government allowed people to join the Chinese Labour Corps. Over 140,000 citizens joined the corps to assist in the war. 100,000 of these aided the British and the other 40,000 helped the French. None of the corps participated in combat. Central Powers - Contribution of smaller forces * Ottoman Empire (now Turkey) was a depleted force from earlier wars with Italy and the Balkans. They had large fights with Russia in Georgia and Persia and fought the British and French in the Middle East. * Bulgaria was one of the largest Balkan states and only one to fight for the Central Powers. They defected from the Balkan League during the Balkan Wars leading to their lack of allied support. They suffered heavy financial losses during the war. ...read more.