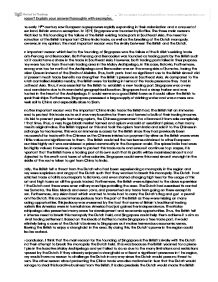 There are many reasons which led to Raffles founding Singapore. In your opinion, what is the most important reason? Explain your answer thoroughly with examples. The early 19th century saw European superpowers rapidly expanding in their colonization and conquest of new land. Britain was no exception. In 1819, Singapore was founded by Raffles. The three main reasons which led to this founding is the failure of the British existing trade ports in Southeast Asia, the need for protection of the British's important China-India trade, as well as the breaking of the Dutch monopoly. However, in my opinion, the most important reason was the rivalry between the British and the Dutch. An important reason which led to the founding of Singapore was the failure of the British's existing trade ports-Penang and Bencoolen. Both Penang and Bencoolen was founded as trading ports by the British such that it could have a share in the trade in Southeast Asia. However, both trading ports failed in their purpose. ...read more.

This was an immense success for the British since they had previously been unsuccessful for trade with the Chinese as the Chinese insisted on payment by silver as the British wares were of little value and significance to them. The British could sell the tea leaves obtained to other European countries highly as it was considered a prized commodity in the European world. The spices India had were also highly valued. However, in order to protect this trade route and ensure it continues to prosper, it is important that the British have a trading port of its own such that its profits will be maximized since it is not subjected to the wrath and taxes of other colonies. Singapore could serve this need since it was right in the middle of the route taken to get from China to India. Lastly, the British felt a threat from the Dutch who had been experiencing a monopoly in the region and they were suspicious and angry of the Dutch such that they wanted to break this monopoly. ...read more.

This was because the British yearned for a piece of pie in the lucrative Malay Archipelago and yet failed to do so due to the many limitations and restrictions imposed by the Dutch. If they already enjoyed a stronghold or at least a significant presence in the region, they would have no reason to challenge the Dutch in any way since the Dutch would pose no threat to them. The other reason about protecting the China trade was also motivated in fear that the Dutch would manage to steal this lucrative business from the British. It is also precisely the Dutch would made the British feel a pressing need to establish new trading ports after the realization that their current ones were useless in keeping the Dutch from expanding rapidly. Thus, in the founding of Singapore, the British would mainly be able to curb the British and prevent its monopoly of trade and also get the other reasons are merely secondary benefits it would achieve with the successful breaking of the Dutch's trade. Thus, in my opinion, the most important reason which resulted in the founding of Singapore is the British's rivalry with the Dutch. ...read more.