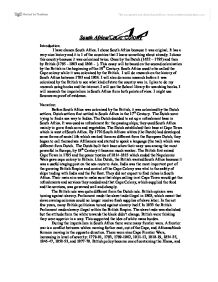 In 1895, one of Rhodes closest friends, Dr Leander Starr Jameson, launched a raid on the Transvaal supported by Rhodes money. The aim of the raid was to seiz the important city of Johannesburg for the British South Africa Company, but it was a failure and Rhodes had to resign as the prime minister of Cape Colony. One result of the raid was that Boers in Transvaal were convinced that the British wanted to take over their country." Extract from: Colonisation and Conflict 1750-1990 by Martin Collier The tension between the British and the Boers was huge and this led to the point that Boers invaded Cape Colony in October 1899. This was the start oof the Boer war which lasted until British victory in 1902. The Boer war was to cost nearly 10 000 lives. Changes: From 1867 on when the rich mines were discovered, enormous changes have occurred. The world's businessmen, especially from Britain, Western Europe and USA, started to spend huge money to have the diamond and gold mines opened. They believed this 'investment' would make them large profits year after year, once the mines were working. Africa had not attracted this much investment before since her main exports of wool, wine and ostrich feathers did not bring large investments. ...read more.

Since the British discovered gold and diamond mines in the country, it made the country richer because investors from around the world were buying the mines. Thanks to the mines, the British built railways throughout South Africa. This has developed new ways of transport. The negative impact on the country was the Boer war and the frontier wars. It has destroyed many crops and many Africans were killed. Many children and women were left without homes. There was also a famine caused due to the Frontier Wars during the Xhosa cattle killing, which led to a lot of people dying. To conclude this, I think that the British had a negative impact in the beginning of the colonization since they brought new diseases to South Africa and also that they have triggered wars with the native people but after the wars, the country started developing in economy, technology, government, society etc. The imperialism had also a great affect on the country and on the people because thanks to the imperialism, slavery was abolished. I think the imperialism in South Africa acknowledged the idea of white mans burden. I think if we were looking from the point of view from the Africans, we would probably get different views because the British were treating them badly and making them work for low wages. ...read more.