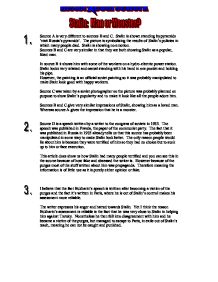 Source A is very different to sources B and C. Stalin is shown standing by pyramids 'visit Russia's pyramids'. The picture is symbolising the results of Stalin's policies in which many people died. Stalin is showing no emotion. Sources B and C are very similar in that they are both showing Stalin as a popular, liked man. In source B it shows him with some of the workers on a hydro-electric power station. Stalin looks very relaxed and casual standing with his hand in one pocket and holding his pipe. However, the painting is an official soviet painting so it was probably manipulated to make Stain look good with happy workers. Source C was taken by a soviet photographer so the picture was probably planned on purpose to show Stalin's popularity and to make it look like all the people adore him. Sources B and C give very similar impressions of Stalin, showing him as a loved man. Whereas source A gives the impression that he is a monster. Source D is a speech written by a writer to the congress of soviets in 1935. The speech was published in Pravda, the paper of the communist party. The fact that it was published in Russia in 1935 already tells us that this source has probably been manipulated in some way to make Stalin look better. The only reason people would lie about him is because they were terrified of him so they had no choice but to suck up to him or face execution. ...read more.

The trial was purely so Stalin could say, 'I gave them a chance'. Both sources are very similar in that they both give the same message, that Stalin was always in charge and that there would always be the same outcome in the verdict. Source I is from a biography of Stalin published in 1947 in Russia. This shows that what was written was probably fake or inaccurate as it was during the purges, meaning that the author had the fear of execution. Source J on the other hand was written in 1974 in Britain long after Stalin's rule. This means what is said about him is more likely to be true as there would be no fear of being prosecuted. Also the cold war was going on in 1974 so Britain was fighting against Russia. Yet I believe this could mean that the assessment is exaggerated because of Britain's dislike towards Russia at the time. Although we know they both disagree about Stalin we deduce this because of when and where they were written and our knowledge of what would happen to people who spoke out about Stalin. Most of the evidence shown in the sources points to Stalin as being a monster. After studying and analysing sources, A, D, E, F, G, H, and J, they all show or explain how evil, malicious and cruel Stalin was. It is only sources, B, C, D and I, which are either praising or supporting him and this is only because the artists or writers are either terrified or their assessments have been manipulated in some way from fear of execution. ...read more.

This would then continue on and on. On the other hand, it could be argued that there were things that Stalin did during his reign that did benefit Russia. During the war Stalin helped by co-ordinating the arms production and making sure everyone was fully equipped. He was also very good at bringing everyone together and motivating people to fight for their country. Although collectivisation was not a huge success it did increase some of the numbers of livestock and grain farmers were producing, which arguably means that the idea did work. He did also have some other achievements, such as: Turkestan-Siberian railroad, the Dneiper dam and the Belomor canal. Some of the sources do support Stalin and show him as an adored man. Even though we have been looking at how most of the assessments are likely to of been manipulated, Stalin would have had some followers that were with him and supported him when some of the pictures were taken. Throughout Stalin's reign there were many things that he did that were horrific and malicious that did make him a real monster and from the research that I have collected I believe him to be just that, yet there were some things that he did for Russia that were in his favour, the main one being that he did, at a heavy cost, bring Russia foreword along way, and that did make his seem like a real man. ...read more.