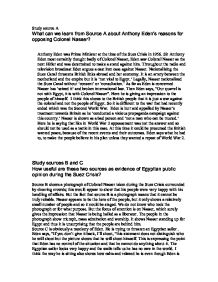 Study source A What can we learn from Source A about Anthony Eden's reasons for opposing Colonel Nasser? Anthony Eden was Prime Minister at the time of the Suez Crisis in 1956. Sir Anthony Eden most certainly thought badly of Colonel Nasser, Eden saw Colonel Nasser as the next Hitler and was determined to make a stand against him. Throughout the radio and television broadcast Eden argues a cast iron case against Nasser. Nationalizing the Suez Canal threatens British links abroad and her economy. It is an artery between the motherland and the empire but it is 'not vital to Egypt.' Legally, Nasser nationalized the Suez Canal without 'consent' or 'consultation.' As far as Eden is concerned Nasser has 'seized it' and broken international law. Then Eden says, "Our quarrel is not with Egypt, it is with Colonel Nasser". Here he is giving an impression to the people of himself. I think this shows to the British people that it is just a war against the colonel and not the people of Egypt. So it is different to the war that had recently ended which was the Second World War. Eden is hurt and appalled by Nasser's treatment towards Britain as he 'conducted a vicious propaganda campaign against this country.' Nasser is shown as a bad person and 'not a man who can be trusted.' ...read more.

Eisenhower said to Eden that a 'method must be attempted before action.' He warns Eden that there is not much support from America or the UN and not to heed the advice 'is virtually to destroy that institution.' Source F is another extract from the Daily Mirror, this time, a letter from a reader. Again, this source is not entirely reliable as it is only one person's view. This may well represent a number of people who would have written along the same lines, but it is still not entirely clear just from the sources given that the majority of public opinion was against Eden's decision to take military action. The majority of people in this argument did not think that Eden's idea was a good one. Source D is probably the only one out of the 3 sources that actually supports Eden. Concluding Eden's decision was not accepted by the people of his country and highly unpopular. Study sources G and H. Does source G support Selwyn Lloyd's statement (source H) about Britain's motives for military action against Egypt? Explain your answer by referring to both sources. Source G is an extract from a letter written by Anthony Eden to the President of the United States regarding Suez. In this he states his primary concern is to free the Suez Canal from Egypt's control. His secondary purpose is to remove Nasser from power and replace him with a regime more favourable to the western powers. ...read more.

This is a letter seeking support and also clarification of their objectives. It says "I do not think that we disagree about our primary objective." The words "I do not think," tell us that they are unclear and so no action has been approved by Eisenhower and this is important because Britain desperately need America's support because they are a very influential super power. Source H shows us that like Nasser, Selwyn Lloyd and certainly Eden believed 'his government had done what was right.' But the source does suggest that Selwyn Lloyd is not quite as cemented to his views as Eden is. Unfortunately the world did not agree with Eden and Britain subsequently looked very foolish, especially after America froze all of Britain's assets and 'forced an end to the invasion.' The Suez Crisis demonstrated how much the United Nations was needed in the world. It was they who ordered the withdrawal of troops from the Suez area. I think the role which the USA and Dwight D Eisenhower took was very influential to the withdrawal of troops as well as the United Nations. The increase of oil prices and blockage of the canal caused America to apply pressure on Britain and France to stop the fighting. After the whole Suez saga, Britain is said to have dropped from its former status as a world super power. There relationship with other countries were changing for the worse and so this is why many people believe that Britain is not as influential in the world as it was 60 to 70 years ago. ...read more.