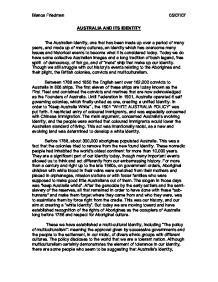 The Australian identity, one that has been made up over a period of many years, and made up of many cultures, an identity which has overcome many issues and historical events to become what it is considered today

AUSTRALIA AND ITS IDENTITY The Australian identity, one that has been made up over a period of many years, and made up of many cultures, an identity which has overcome many issues and historical events to become what it is considered today. Today we do have some collective Australian images and a long tradition of bush legend, free spirit of democracy, of fair go, and of "mate" ship that make up our identity. Though we still struggle with out history's events relating to the Aborigines and their plight, the British colonies, convicts and multiculturalism. Between 1788 and 1850 the English sent over 162,000 convicts to Australia in 806 ships. The first eleven of these ships are today known as the First Fleet and contained the convicts and marines that are now acknowledged as the Founders of Australia. Until Federation in 1901, Australia operated 6 self governing colonies, which finally united as one, creating a unified identity. ...read more.

The slogan in those days was "keep Australia white". After the genocide by the early settlers and the semi-slavery of the reserves, all that remained in order to have done with these "sub-humans" and make them forget where they came from and who they were, was to assimilate them by force right from the cradle. This was our history, and our aim at creating a "white identity". But today we are moving toward and have established recognition of the rights of Aborigines as the occupiers of Australia long before 1788 and respect for Aboriginal culture. These we have established a multi-cultural identity, including "The policy of multiculturalism": meaning the approval given by successive governments and the people to the settlement, in our midst, of divers ethnic groups with different cultures. The policy discloses to the world that we are a tolerant nation. ...read more.

According to the statistics in 1996, nearly 42% of Australian's population was born overseas or has one or both parents born overseas. The nation comprises of many, many ethnic groups and different cultures, all of which make up our Australian identity. Though our history may be shameful and although we haven't officially said "sorry", we are tolerant and want Australia to be the best it can be, even if we need help from people we never considered Australians previously. Today, all Australians, of all colours and nations march together - abolishing our old identity, renewing and unifying our new identity. We all identify ourselves toward out beautiful homeland, which is widely regarded as safe and opportunistic. We include our native animals in our identity, we succeed in areas of sport and technology and have a range of food, clothing and music which is "stereo -typically" Australian. All this makes up who we are. We are all Australian's. ?? ?? ?? ?? Bianca Friedman 05/07/07 ...read more.