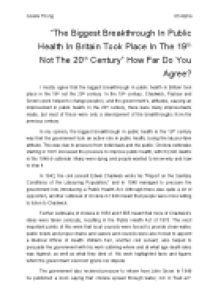 THE BIGGEST BREAKTHROUGH IN PUBLIC HEALTH IN BRITAIN TOOK PLACE IN THE 19TH NOT THE 20TH CENTURY HOW FAR DO YOU AGREE?

The core of the work was completed by 1865, but took another ten years to finish completely as it was such a huge project and Bazalgette had made sure to plan ahead for the growth of the population. In 1861, Pasteur published his germ theory. In 1864 he conducted a series of public experiments that convinced most scientists that diseases were caused by bacteria. This finally provided clear proof that Chadwick, Farr and Snow had all been correct. Faced with this scientific proof, people were more willing to pay taxes to cover the costs of public health reforms. These included fresh water supplies, good sewers and public toilets. This also meant that more local towns began to make these reforms. The government still did not make public health reform compulsory, however. They only voters in general elections were wealthy landowners and the well-off middle classes, the very people who would have to pay more if public health reforms became compulsory. Governments did not want to risk losing votes, no matter what kind of pressure they were under. In 1867, working men in towns were given the right to vote for the first time followed by men in country areas in 1884. ...read more.

After World War Two, people?s attitudes changed to that of a more united country. The Beveridge Report was published in 1942, which indicated ways to improve people?s lives and banish poverty. He suggested the idea of a National Health Service and that everyone should pay into National Insurance in order to pay benefits and pensions. Although met with great enthusiasm, there was a lot of opposition to the National Health Service (NHS), especially from doctors. However, Aneurin Bevan convinced many doctors to support him by agreeing that doctors could continue to treat patients privately whilst working for the NHS. In July 1948, the NHS was introduced. Although people thought that the system was being taken for granted, it played a vital role in increasing people?s life expectancy, especially of women after childbirth. In conclusion, although there were many great breakthroughs in the 20th century regarding public health, I feel that the breakthroughs in the 19th century had a greater significance, especially in revolutionising the way people think. As you can see from the events in the 19th century, people?s attitudes had a huge impact on public health. Although the NHS was a very important breakthrough, I do not think that it would have come around with the laissez-faire attitude still in place. This is why I agree that the biggest breakthrough in public health in Britain took place in the 19th not the 20th century. ...read more.