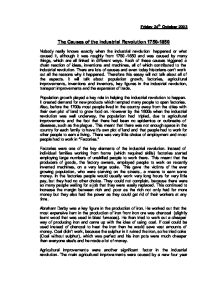 Friday 24th October 2003 The Causes of the Industrial Revolution 1750-1850 Nobody really knows exactly when the industrial revolution happened or what caused it, although it was roughly from 1750-1850 and was caused by many things, which are all linked in different ways. Each of these causes triggered a chain reaction of ideas, inventions and machines, all of which contributed to the industrial revolution. There are lots of causes and even today historians can't work out all the reasons why it happened. Therefore this essay will not talk about all of the aspects. It will talk about population growth, factories, agricultural improvements, inventions and inventors, key figures in the industrial revolution, transport improvements and the expansion of trade. Population growth played a key role in helping the industrial revolution to happen. It created demand for new products which tempted many people to open factories. Also, before the 1700s most people lived in the country away from the cities with their own plot of land to grow food on. However by the 1800s when the industrial revolution was well underway, the population had tripled, due to agricultural improvements and the fact that there had been no epidemics or outbreaks of diseases, such as the plague. ...read more.

Agricultural improvements were another significant factor in the industrial revolution. The main agricultural improvements were caused by a new four year cycle, in which they grew food, and then grew plants, for the animals to eat and the animal's manure enriched the soil. New machinery meant that fewer workers were needed on farms so more people went to work at factories and the new methods of farming meant that there was enough food for the growing population, which led to a drop in the death rate and a rise in the birth rate. There was also more meat available because, for the first time, careful select breeding was used to make fatter and fatter animals. The population grew and there were more people to work in the factories. The other main point was that as farmers grew more, they earned more and had spare money, which they could invest into new businesses and inventions. This was very tempting, because they could make a lot of money, and many decided to do so. This was extremely good for the inventors who, once they had come up with an idea, needed capital to spend on making the invention and testing it. ...read more.

It caused improvements in transport in every area, from rivers to roads. This was because it meant that people could travel further, faster and cheaper by boat and by train to all of England, and, in the boat's case, even to places like The Americas and other ex colonies. This also helped trade as it meant that people could send their goods further away, for a much cheaper cost and create a much bigger market. This was called expansion of trade and it meant that new inventions and goods could be sent to further away and this caused businessmen to make more money, which in turn could be invested back into their businesses. This caused many new inventions, which in turn improved the quality of goods. In my opinion all of these factors were very important in causing and giving momentum to the industrial revolution and many more factors also contributed to it. They were all interlinked and connected and I believe that the most important factor in the industrial revolution was the individuals that invented new machines. This is because had it not been for those inventions, there would have been no agricultural improvement, which would mean no population growth, which would mean no workers or machines in factories, which would mean no new products or demand, and the industrial revolution would have never happened. ...read more.