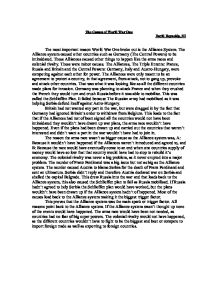 The Causes of World War One

The Causes of World War One David Reynolds, 3H The most important reason World War One broke out is the Alliance System. The Alliance system caused other countries such as Germany (The Central Powers) to be intimidated. These Alliances caused other things to happen like the arms races and colonial rivalry. These were minor causes. The Alliances, The Triple Entente: France, Russia and Britain and the Central Powers: Germany, Italy and Austro-Hungary, were competing against each other for power. The Alliances were only meant to be an agreement to protect a country, in that agreement, from attack, not to gang up, provoke and attack other countries. ...read more.