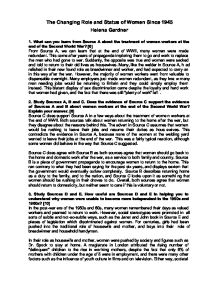 The Changing Role and Status of Women Since 1945

The Changing Role and Status of Women Since 1945 Helena Gardner 1. What can you learn from Source A about the treatment of women workers at the end of the Second World War? [6] From Source A, we can learn that at the end of WWII, many women were made redundant. This came after years of propaganda imploring them to go and work to replace the men who had gone to war. Suddenly, the opposite was true and women were sacked and told to return to their old lives as housewives. Many, like the welder in Source A, had relished in their new found role as breadwinner and worker, and had expected to carry on in this way after the war. However, the majority of women workers went from valuable to dispensable overnight. Many employers just made women redundant, as they knew many men needing jobs would be returning to Britain and they could simply employ them instead. This blatant display of sex discrimination came despite the loyalty and hard work that women had given, and the fact that there was still "plenty of work" left. 2. Study Sources A, B and C. Does the evidence of Source C support the evidence of Sources A and B about women workers at the end of the Second World War? Explain your answer. ...read more.

Source E provides a useful insight into the way that boys and girls were taught about their traditional roles in the Janet and John books which were popular throughout the 1950s and 60s. Overall, each source provides useful evidence of the societal pressures and prejudice that meant many women felt unable to become more independent through work, fashion and the use of government legislation which had promised equality. 4. Study Sources F and G. Use Sources F and G, and your own knowledge, to explain why the Equal Pay Act and other legislation in the 1970s did not achieve the desired effect. [12] In 1970, the Equal Pay Act (EPA) was passed after women went on strike and held demonstrations demanding equal pay. The female Employment Secretary, Barbara Castle, wanted to avoid any further unrest and introduced the new piece of legislation. However, the scope was narrow and employers had a five year settling in period. This allowed employers to make changes to discriminate against women within the law. Tactics included drawing up male-only short lists for jobs, and giving men and women doing the same work different titles, such as "trainee manager" and "shop assistant". It was then perfectly legal to then put these job titles at different positions on the pay scale. Women also found that it was, and still is, incredibly difficult to prove that discrimination had taken place. ...read more.

However, women are still not equal when it comes to employment opportunities. More women that ever before, particularly those who are married are combining employment with having children and housework. However, many men still only have to cope with employment, despite the advent of the "modern man" and paternity leave. Source H shows us how today's modern woman must take on the roles of 8 different servants, such as the nanny, cook and maid, who would have helped in the past. However, unlike the servants she does not receive money for her housework as feminists campaigned for in the 70s. Many women still feel pressured into staying at home with their pre-school children: 75% of mothers believe that women should be at home with their young children, despite more married women working at any time since WWII. Overall, women are no longer second class citizens in law due to the reams of legislation brought in to protect women's rights, such as the Equal Pay Act. Whilst laws have, in some ways, helped significantly - some more than others - in reality they have often not changed anything. New laws and regulations don't bring social change (Source F) and the nation's attitudes and values have been the greatest obstruction to gender equality in Britain today. Women have greater equality today than at any time in history, but full equality has not been achieved, and the archaic values of many of those high up in society may mean that this is never achieved within our lifetimes, if at all. ...read more.