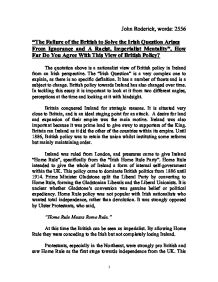 &quot;The Failure of the British to Solve the Irish Question Arises From Ignorance and A Racist, Imperialist Mentality&quot;, How Far Do You Agree With This View of British Policy?

John Roderick, words: 2556 "The Failure of the British to Solve the Irish Question Arises From Ignorance and A Racist, Imperialist Mentality", How Far Do You Agree With This View of British Policy? The quotation above is a nationalist view of British policy in Ireland from an Irish perspective. The "Irish Question" is a very complex one to explain, as there is no specific definition. It has a number of facets and is a subject to change. British policy towards Ireland has also changed over time. In tackling this essay it is important to look at it from two different angles, perceptions at the time and looking at it with hindsight. Britain conquered Ireland for strategic reasons. It is situated very close to Britain, and is an ideal staging point for an attack. A desire for land and expansion of their empire was the main motive. Ireland was also important because it was prime land to give away to supporters of the King. Britain ran Ireland as it did the other of the countries within its empire. Until 1886, British policy was to retain the union whilst instituting some reforms but mainly maintaining order. Ireland was ruled from London, and pressures came to give Ireland "Home Rule", specifically from the "Irish Home Rule Party". Home Rule intended to give the whole of Ireland a form of internal self-government within the UK. This policy came to dominate British politics from 1886 until 1914. ...read more.

This settlement quickly became one of the most controversial issues in Irish history. It was eventually accepted but not without bitter opposition, mainly from the pro unionists, who saw it as a stepping-stone to full independence. It was a progressive step for the republicans. It contained substantial flaws, for example it ignored the wishes of Catholics and nationalists in Northern Ireland. It did not establish a truly free Republic, simply an autonomous state. Partition was the response of the British to the changing nature of the Irish question. It is another example of the British Government being reactive rather than pro-active in their policymaking. Whether or not the Irish gained from partition is questionable. Partition can be analyzed as the British desperately clinging to the last remnants of its Empire, mainly for economic and strategic reasons. The savage and brutal actions of the "Black and Tans" are an example of Imperialist brutality, with the British trying to solve political matters with violence rather than negotiations. The IRA also ran a terror campaign. However the British can be blamed for provoking the situation, and effectively lowering themselves to violent, repressive tactics to solve political problems. This can be seen as a very imperialist and out-of-date approach, when looked at the time and also when looking at the situation with hindsight. After Partition a chasm formed which lay at the heart of Irish politics and society from 1922 to the present day. ...read more.

Britain's involvement has always spelled trouble from the day they conquered it in the 1500's. Returning to the question, that Britons failure to solve the problem was due to a racist, ignorant imperialist mentality is not far from the truth and very prevalent before 1970's. Britain was a country that prided itself on its empire, but as times changed it slowly gave independence to its colonies. Ireland was to "close to home" to be granted full independence. It is this prior reluctance to give Ireland independence before there was no turning back, so as not to appear weak, that caused the troubles. Britain's main failure was their reactive role in relation to the problems, rather than being proactive in policy making towards Ireland, before the turn of the 1970`s. Since then they have been trying to find a political accord but this nearly impossible, due to the political state of Ireland. The British made many mistakes in Ireland. Such as using the army, who were seen as a symbol of imperialist oppression, and were entirely unsuitable as a police force. The main problem of the Irish question is the complexity of it. There is no simple political answer. It is fair to say that Britain has not done all that is possible to find a median at which every denomination and individual in Ireland is politically content, but this is nearly impossible. The Irish question is one that is doomed to go round and round in circles, with no solution to be seen in the near future. 1 ...read more.