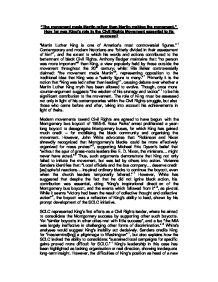 &quot;The movement made Martin rather than Martin making the movement.&quot; How far was King's role in the Civil Rights Movement essential to its success?

"The movement made Martin rather than Martin making the movement." How far was King's role in the Civil Rights Movement essential to its success? "Martin Luther King is one of America's most controversial figures."1 Contemporary and modern historians are "bitterly divided in their assessment of him"1, and the extent to which his words and actions contributed to the betterment of black Civil Rights. Anthony Badger maintains that: "no person was more important"6 than King, a view popularly held by those outside the movement throughout the 20th century; whilst Ella Baker controversially claimed: "the movement made Martin"3, representing opposition to the traditional idea that King was a "saintly figure to many."1 Primarily it is the notion that "King was led rather than leading"1, causing debate over whether a Martin Luther King myth has been allowed to evolve. Though, once more counter-argument suggests "the wisdom of his strategy and tactics"1 to be his significant contribution to the movement. ...read more.

Yet "similar boycotts in other cities met with little success", and also "the MIA was largely ineffective in challenging other forms of discrimination."2 White's analyses would suggest King's inability act decisively. Sanders credits King for "mastermind[ing] a pilgrimage to Washington"1, but also explains how the SCLC lacked the ability to consolidate: "sustained local campaigns for specific gains proved more difficult for SCLC."1 King's leadership in this case has been highlighted as lacking organisation or real direction, showing inadequate long-term insight. However, the difficulties of King's position as head of a new black Civil Rights group are aptly explained by Sanders: "As always, one of the greatest organisational problems he face was the local and national black divisions."1 Though this would excuse the SCLC's lacking gains on a legislative front, it fails to account for King's inability to mobilise the people of Atlanta, and thus the SCLC's early shortcomings and the failure to achieve its primary objective - encouraging blacks to vote, are evidence enough for revisionists to question King's leadership skills. ...read more.

Perhaps unfairly, King's ability is also challenged in view of the SCLC's contribution to the 'Albany Movement'. White's view of the fact that the Albany activists "did not welcome the SCLC presence and were openly critical of King's 'charismatic' leadership style"2 demonstrates the inter-organisational pressures SCLC had to operate under. King's efforts, however, were also seen as a blunder, as he failed to account for the lack of publicity as a result of an absence of white violence to black protest, exposing King's reactionary approaches and bad planning. Yet, Lewis defends King, claiming "It was the planning, the organizing, the strategy that he brought with him that brought change"9, and believes "it was a miscalculation on the part of a number of people that a spontaneous appearance by Martin Luther King could bring change", thus implying that King's responsibility for the failure was not entire. 1028 words - will use wider range of sources when my books arrive!! ...read more.