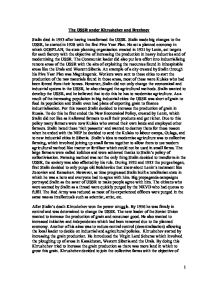 The USSR under Khrushchev and Brezhnev

The USSR under Khrushchev and Brezhnev Stalin died in 1953 after having transformed the USSR. Stalin made big changes to the USSR, he started in 1928 with the first Five Year Plan. He set a planned economy in which GOSPLAN, the state planning organisation created in 1921 by Lenin, set targets for each factory with the objective of increasing the production in heavy industries and of modernizing the USSR. The Communist leader did also put lots effort into industrialising remote areas of the USSR with the aim of exploiting the resources found in inhospitable areas like the Urals and Western Siberia. An example of a city created by Stalin through his Five Year Plan was Magnitogorsk. Workers were sent to these cities to start the production of the raw materials found in those areas, most of these were Kulaks who had been forced from their homes. However, Stalin did not only change the economical and industrial system in the USSR, he also changed the agricultural methods. Stalin wanted to develop the USSR, and he believed that to do this he has to modernise agriculture. As a result of the increasing population in big industrial cities the USSR was short of grain to feed its population and Stalin even had plans of exporting grain to finance industrialisation. ...read more.

Industry was also changed by Khrushchev throughout the 1950s. He wanted to decentralise the USSR by abolishing central ministers and created Sovnarkhozy which controlled areas of the USSR and were encouraged to taker their own decision with the objective of increasing independence and initiative. Khrushchev also tried to reduce the fear by relaxing the control on workers allowing them to change their job. New industries were created such as chemical, natural gas and synthetics industries to provide more jobs and develop the USSR. To compete with the USA Khrushchev invested lots of money on military and scientific research. As a result the number of researchers increased rapidly and missiles were made to replace men in the Red Army. The first satellite, Sputnik 1 and the first man in space, Yuri Gagarin were also a result of Khrushchev reforms. In February 1956 Khrushchev made the Secret Speech in the Twentieth Party Congress. In this speech he criticised Stalin's cult of personality, which led him to abuse of his power. Khrushchev also read out Lenin's testament and described how Stalin purged million of innocent people, he said that Stalin was not the hero and genius he claimed to be. ...read more.

A socio-economic slowdown was caused as the USSR could not continue with its international policies. Corruption in the government led to the stagnation of the USSR. Members of Brezhnev's own family were involved in politics and took lots of money from the government to become wealthier. With the objective of competing with the USA the USSR wasted vast amount of money on armaments and the space race, the Red Army also participated in many wars such as the Afghanistan War in 1979 which was a big cost in terms of lives, equipment and cash and did certainly turn many ordinary people citizens the government. This led to the stagnation of the USSR as Brezhnev did not improve the economy of the USSR, he forgot about the old system and he took no control of it. Brezhnev actions could even suggest how he just wanted to remove oppositions by arresting dissidents and how he just wanted to be the leader of the USSR for the money him and his family was making out of it. The stagnation of the USSR was just a negative effect of everyone as the USSR went backwards. However, after two more successors Gorbachev came into power to make other important changes to the USSR. ?? ?? ?? ?? 1 ...read more.