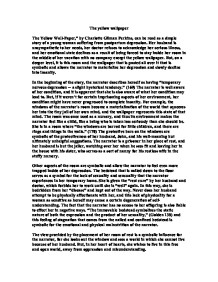 The yellow wallpaper The Yellow Wall-Paper," by Charlotte Gilman Perkins, can be read as a simple story of a young woman suffering from postpartum depression. Her husband is unsympathetic to her needs, her doctor refuses to acknowledge her serious illness, and her emotional state declines as a result of being forced to stay inside her room in the middle of her vacation with no company except the yellow wallpaper. But, on a deeper level, it is this room and the wallpaper that is pasted all over it that is symbolic and allows the narrator to materialize her depression and slowly decline into insanity. In the beginning of the story, the narrator describes herself as having "temporary nervous depression -- a slight hysterical tendency." (169) The narrator is well aware of her condition, and it is apparent that she is also aware of what her condition may lead to. But, if it weren't for certain imprisoning aspects of her environment, her condition might have never progressed to complete insanity. For example, the windows of the narrator's room become a materialization of the world that squeezes her into the tiny jail of her own mind, and the wallpaper represents this state of that mind. The room was once used as a nursery, and thus its environment makes the narrator feel like a child, like a being who is taken less seriously than she should be. ...read more.

Out of one window I can see the garden, those mysterious deep-shaded arbors, the riotous old-fashioned flowers, and bushes and gnarly trees. Out of another I get a lovely view of the bay and a little private wharf belonging to the estate. There is a beautiful shaded lane that runs down there from the house. I always fancy I see people walking in these numerous paths and arbors, but John has cautioned me not to give way to fancy in the least. (171) It is this vision of people, this hope of other life existing around her, that drives the narrator to see a woman in the wallpaper of her room. She recreates the design of the "gnarly tress" and "numerous paths" in the designs of the wallpaper, and the woman imagined in the wallpaper is at first just one of these people on one of the paths, enjoying life and freedom. This view from her "prison" window is also symbolic of the rebellious feelings of the narrator towards her husband. He warns her to keep herself together and will herself away from her overactive imagination, and she in turn defies him in the most obvious way: the narrator envelopes her fantasies and hands herself over to insanity. The wallpaper itself is perhaps the largest symbol in Charlotte Gilman Perkins' "The Yellow Wall-Paper." ...read more.

In the end of the story, the narrator tears the wallpaper off of the walls as a final act of defiance. Throughout the story, the narrator seeks for a way out of the house, out of her monotonous daily lifestyle. But, alternately, she escapes her depression by entering insanity, a state of mind where she no longer understands what depression is or feels any of its effects. Towards the end, the narrator feels that she is cured of her troubles. She says, "I wonder if they all come out of that wall-paper as I did?" (180) She believes that by locking herself in her symbolic physical prison and tearing off the wall-paper that is symbolic of her mental state, she is releasing herself from all of the expectations of her husband and all the depression she felt throughout the story. The narrator's physical environment and the symbolism it contained allowed her to materialize her depression and descend into insanity. It is clear that it is possible to view the wallpaper as a reflection of the narrators state of mind and the fact that she took on the character of the woman in the wallpaper to allow herself to break free of the ties that bound her. The confinement of the barred room and the disturbingly vivid wallpaper proved not only to be complimentary to the story, but also to foreshadow the narrator's escape from depression into a new sphere of insanity. ?? ?? ?? ?? ...read more.