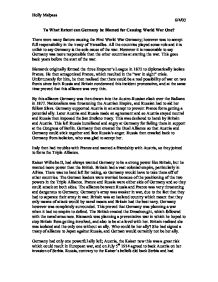 To what extent can Germany be blamed for causing World War One?

To What Extent can Germany be Blamed for Causing World War One? There were many factors causing the First World War Germany; however was to accept full responsibility in the treaty of Versailles. All the countries played some role and it is unfair to say Germany is the sole cause of the war. However it is reasonable to say Germany was more responsible than the other countries at starting the war. This goes back years before the start of the war. Bismarck originally formed the three Emperor's League in 1872 to diplomatically isolate France. He then antagonized France, which resulted in the "war in sight" crisis. Unfortunately for him, he then realised that there could be a real possibility of war on two fronts since both Russia and Britain condemned this incident provocative, and at the same time proved that this alliance was very thin. By this alliance Germany was then drawn into the Austro-Russian clash over the Balkans in 1877. ...read more.

France and Russia were either side of Germany and so they could attack on both sides. The alliance between Russia and France was very threatening and dangerous to Germany. Germany's army was weaker in war, due to the fact that they had to separate their army in war. Britain was an isolated country which meant that they only means of attack would by naval means and Britain had the best navy. Germany however was completely surrounded. This proved that Germany was planning a war when it had no empire to defend. The British created the Dreadnought, which followed with the naval arms race. Bismarck was planning a preventative war in which he hoped to stop Britain from getting involved, and also to be at a level with her. Britain realised she was isolated and the only one without an ally. Who could be her ally? She had signed a treaty of alliance to Japan against Russia, and German would certainly not be her ally. ...read more.

The German's believed that war with France was inevitable because of Alsace- Lorraine. So they devised a plan which would they thought would guarantee their victory, called the Schlieffen plan. It was based on mass mobilisation. It was believed that in the event of a war it would take Germany thirty-six hours to mobilise, France forty-eight hours and Russia three weeks. The Germans would first attack France and then after defeating France go on to attack Russia. But in doing this, Germany was risking the possible chance of war with Britain. Germany tried to provoke France and to gain more power throughout Europe. The alliance was just formed because war was planned. The other countries were antagonized and had to keep the balance of power by copying the alliance system or else become defeated by war. For instance, trying to rival Britain's navy. Germany had no empire to defend, and so this was seen as means of attacking Britain. Germany caused the war, but it was not their plan for to result in world war or humiliation. Holly Malpass 6/4/03 ...read more.