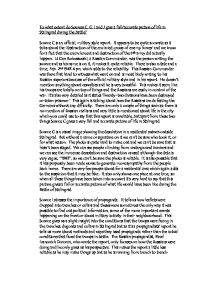 To what extent do Sources C, G, I and J give a full/accurate picture of life in Stalingrad during the battle?

To what extent do Sources C, G, I and J give a full/accurate picture of life in Stalingrad during the battle? Source C is an official, military style report. It appears to be quite accurate as it talks about the 'destruction of the encircled group of enemy forces' and we know for a fact that the encirclement and destruction of the 6th army did actually happen. Lt Gen Rokossovski, a Russian Commander, was the person writing the source and as his name is on it, it makes it quite reliable. There is also a date and a time, Feb. 2nd 1943 4 pm which adds to the reliability. This Russian Commander was there first hand to witness what went on and is most likely writing to his Russian superiors because of the official military style and in his report. He doesn't mention anything about casualties and he is very boastful. This makes it seem like his troops are totally on top of things and the Russians are easily in control of the war. It's also very detailed as it states 'Twenty-two divisions have been destroyed or taken prisoner.' ...read more.

It also only shows one place at one time, so when all these things have been taken into account it's very hard to say that this picture gives a full or accurate picture of what life would have been like during the Battle of Stalingrad. Source I stresses the importance of propaganda. It tells us how leaflets were dropped into trenches or cellars and theses were sometimes the only way it was possible to find out political information, some of the more important events happening on the front or about military activity in their neighbourhood. This Source gives us a slight insight into the conditions that the troops were facing in the trenches, dugouts and cellars in Stalingrad but as it's a propagandists' report he tells us more about methods and ways they used propaganda rather than the actual conditions that faced the troops in battle. The Russian propagandist, Pavel Ivanovich Doronin, who wrote the report, only focuses on how the Russians were doing and he only gives us his perspective. This makes the report a little less reliable as he may make things up but as he is running from trench to trench giving out information, we ...read more.

The tone that it is written in isn't a very official tone. It's written as if for a friend or colleague and may be meant to generate sympathy whereas if it had been official it would have had a lot more fact in it and a lot less opinion. There also isn't any recorded date on it or purpose for writing it and no mention of Russians or civilians so all in all this Source is quite an unreliable source and doesn't give us a full picture of life during the Battle of Stalingrad. In conclusion these four sources alone do give us some useful information but ultimately are not enough to paint a full/accurate picture. Sources C and I are both written by Russians, J is written by a German and it's not possible to decide who took the photo in Source G. So in each of these reports the writer is going to be more biased towards his side. A civilians report would be the most reliable because they would see the full picture as they would know through propaganda, newspapers etc what was happening in different areas and this would probably be a fuller more honest report of life in Stalingrad during the battle. ...read more.