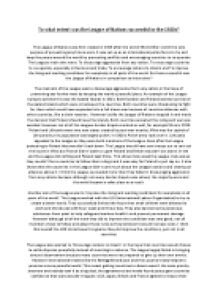 To what extent was the League of Nations successful in the 1920s?

Transfer-Encoding: chunked ﻿To what extent was the League of Nations successful in the 1920s? The League of Nations was first created in 1919 after the end of World War 1 with the sole purpose of preventing any future wars. It was set up as an international police force to try and keep the peace around the world by preventing conflicts and encouraging countries to co-operate. The Leagues main aims were: To discourage aggression from any nation, To encourage countries to co-operate, especially in Business and trade, To encourage nations to disarm and To improve the living and working conditions for everybody in all parts of the world. But how successful was the League of Nations in comparison to these aims? The main aim of the League was to discourage aggression form any nation in the hope of preventing any further wars by keeping the world a peaceful place. An example of the League trying to achieve this was the Aaland Islands in 1921. Both Sweden and Finland wanted control of the Aaland Islands which were in between the countries. ...read more.

It also shows that the countries in the League didn?t care much about the Leagues actions and clearly put alliances above it. I think the League succeeded more than they failed in discouraging aggression from any nations because although not every border dispute was solved, the majority were and the world became a safer place as a result. Another aim of the League was to ?Improve the living and working conditions for everybody in all parts of the world?. The League worked with the ILO (International Labour Organisation) to try to create a better world. They successfully limited the hours that small children were allowed to work and introduced a 48 hour week and 8 hour day. They also banned some poisonous substances from paint to help safeguard workers health?s and prevent permanent damage. However although all of the work they did to improve the conditions was very good, not all members chose to follow and adopt these rules as they believed it would increase costs. I think that overall the LON did achieve this goal as they did improve the conditions, just not in all countries. ...read more.

This was a border dispute between Germany and Poland over an industrial region that was rich in iron and steel. Both countries wanted it and eventually the League sent French and British troops to keep order. In 1920 a plebiscite was organised for Silesians to vote on which country they wanted to join. The industrial areas mainly voted for Germany, the rural areas mainly for Poland. The league then divided the region fairly and set up rail links between the two countries with water and power supplies. Both countries accepted the decision. This shows how the LOB helped to bring countries together peacefully to o-operate, I think the LON achieved this aim very well as there were no issues with the final outcome. In conclusion I think that the LON was relatively successful in the 1920s because they definitely met some of their aims such as improving the working conditions for everybody around the world and Encouraging countries to co-operate. However not all the border disputes were handled particularly well and in some the League did nothing. I therefore think that the LON could have been more successful if America had joined or if the countries in the league were more committed to it. ...read more.