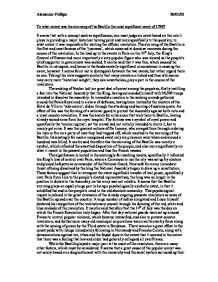 To what extent was the storming of the Bastille the most significant event of 1789? It seems that with a concept such as significance, one must judge an event based on the role it plays in providing a major historical turning point and more specifically to the question; to what extent it was responsible for starting the official revolution. The storming of the Bastille is the first and most famous of the 'journees', which occurred at decisive moments during the course of the revolution. In the lead up to the events in Paris on the 14th July, the King's General of finance and more importantly a very popular figure who was viewed as the people's chief supporter in government was sacked. It can be said that it was this, which caused the Bastille in retrospect, and hence is the fundamentally significant circumstance in causing the event; however it seems fairer not to distinguish between the two events, but rather regard them as one. Taking this view suggests similarly that many events are linked and thus while some may carry more 'historical weight', they can nevertheless, play a part in the course of the revolution. The sacking of Necker led to a great deal of unrest among the populace, firstly instilling a fear into the National Assembly that the King, having surrounded himself with 30,000 troops intended to dissolve the assembly. ...read more.

It is also coincidental that the day of the Bastille was also that of the highest ever bread prices, which suggests a combination of parallel forces working in the direction of revolution. On similar lines, there were a number of political events preceding the Bastille, which are essential to the course of events. The convening of the Eterny General in the first place on May 4th is symbolic of the combined frustrations of the three estates in relation to the feudal system and the monarchy. At first the three estates were separated according to rank, yet within a month a number of the First and Second Estates had joined the Third, which not only meant a shift in the balance of power to the bourgeoisie, but led to the declaration of themselves as a National Assembly. It may therefore be argued that the original convening of the three estates was a major event in that its repercussions were the production of the body, which was seen by the masses as the main symbol of opposition to the monarchy and searching for a change in the social system. It seems that the King sealed his position as a hostile figure to the people in the eyes of the people when he panicked over the newly declared Assembly and declared a S�ance Royale. ...read more.

On the other hand, the 'October days' was merely an additional example of a grievance being voiced, and it had little affect on events to increase or worsen what was already taking place across France. It seems certain that it was the combination of events and external forces, which set the French Revolution in motion. It is also difficult to distinguish between each event as most are rather interconnected. It was the state of mind and mood of the masses, a result of the starvation which was background to the course of events, which forced them to take action and revolt, yet it was the action of the higher status opposition to the monarchy on a political level which fundamentally articulated the people's sentiments. The Bastille, in my opinion was a quintessential aspect in the lead up. While only 100 men were killed, it acts as a symbol on many levels and in many ways was the single event, which roused the masses, and thus its significance is substantial. In addition the immediate reaction of the people is evident of this. Yet the events preceding it were of equal importance in terms of their psychological effect, and the constitutional changes following it, which are still present in French society today. ?? ?? ?? ?? Alexander Phillips 28/01/05 ...read more.