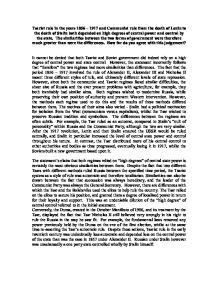 Tsarist rule in the years 1856 - 1917 and Communist rule from the death of Lenin to the death of Stalin both depended on high degrees of central power and control by the state. The similarities between the two forms of government were therefore much g...

Tsarist rule in the years 1856 - 1917 and Communist rule from the death of Lenin to the death of Stalin both depended on high degrees of central power and control by the state. The similarities between the two forms of government were therefore much greater than were the differences. How far do you agree with this judgement? It cannot be denied that both Tsarist and Soviet government did indeed rely on a high degree of central power and state control. However, the statement incorrectly follows that "therefore" the two regimes had more similarities than differences. The fact that the period 1856 - 1917 involved the rule of Alexander II, Alexander III and Nicholas II meant three different styles of rule, and ultimately different levels of state repression. However, since both the communist and Tsarist regimes faced similar difficulties, the sheer size of Russia and the ever present problems with agriculture, for example, they both inevitably had similar aims. Both regimes wished to modernize Russia, while preserving their own position of authority and prevent Western intervention. However, the methods each regime used to do this and the results of these methods differed between them. The motives of their aims also varied - Stalin had a political motivation for isolation from the West (communism versus capitalism), whilst the Tsar wished to preserve Russian tradition and symbolism. ...read more.

This certainly does not explain the irrelevance of the Soviets during his reign, but his attitude varies with the Tsar, who probably simply resented handing any of his God-given power to other authorities. The fact that Stalin personally signed every order of execution issued during the purges outlines the level of his involvement. It should also be remembered that despite the reforms and slight de-centralisation of power that can be seen under Alexander II, 1882 84 saw counter - reforms, and after his assassination in 1881, temporary regulations gave the police extra power to crush revolutionary activity - displaying similar attitudes to Communism - that ultimately the people needed to be repressed, not encouraged in order to ensure compliance. This is seen in Stalin's reaction to the peasant's stubbornness in response to Collectivisation, for example. The Orthodox Church was undoubtedly very important for the Tsar. It almost helped legitimize his claim that the Tsar possessed a God-given right to rule the country, and justified the autocratic nature of Tsarist rule. Particularly by the peasants, the Tsar was seen as a "father figure." However, by the early twentieth century, the overall opinion of the Russian people, now becoming increasingly educated, was that this claim was no longer as legitimate as it had once been considered. ...read more.

The use of press censorship, the military and general oppression by both regimes are strikingly similar, despite different motives. Neither the Soviets, nor the Zemstvos had any sort of power or influence, and the fact that the regimes were running such a massive country from either Moscow or St. Petersburg itself suggests a central state control. Both the Tsar, as a result of his divine right, and Stalin, due to self interest and paranoia, totally ruled everything in Russia, and any power designated elsewhere was never a significant amount. Although Stalin ensured that the following was not the case, the role of the leader was not integral to the ideology of Marxism, unlike in Tsarism. After the fall of Khrushchev, there was collective leadership, suggesting the central control exercised by Stalin within the Communist Party was indeed a part of his cult of personality. It can also be said that overwhelmingly the similarities between the two forms of government do outweigh the differences. Differences are often subtle or arise due to a variation of motivation. However, the question focuses on the degree of dependence of central control and power by the state, thus any other differences focusing on other subjects have not been examined, and so a response to the second part of this statement can only be based on the subjects referred to in the question. Words - 2181 ...read more.