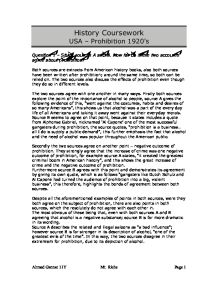 History Coursework USA - Prohibition 1920's Question 1 - Study sources A and B. How far do these two accounts agree about prohibition? Both sources are extracts from American history books, also both sources have been written after prohibition; around the same time, so both can be relied on. The two sources also discuss the effects of prohibition even though they do so in different levels. The two sources agree with one another in many ways. Firstly both sources explore the point of the importance of alcohol to people, source A gives the following evidence of this, "went against the costumes, habits and desires of so many Americans", this shows us that alcohol was a part of the every day life of all Americans and taking it away went against their everyday morals. Source B seems to agree on that point, because it states includes a quote from Alphonse Gabriel, nicknamed 'Al Capone' one of the most successful gangsters during prohibition, the source quotes, "prohibition is a business... all I do is supply a public demand", this further emphasis the fact that alcohol and the need of alcohol was popular throughout the American public. Secondly the two sources agree on another point - negative outcome of prohibition. They strongly agree that the increase of crime was one negative outcome of prohibition, for example source A states, "it created the greatest criminal boom in American history", and this shows the great increase of crime and the negative outcome of prohibition. Furthermore source B agrees with this point and demonstrates its agreement by giving its own quote, which is as follows "gangsters like Dutch Schulz and Al Capone had turned the audience of prohibition into a big, violent business", this therefore, highlights the bonds of agreement between both sources. Despite all the aforementioned examples of points in both sources, were they both agree on the subject of prohibition, there are also points in both sources, which the resolutely do not agree with each other in. ...read more.

In addition, the drawing just portrays the artist's judgment, and has generalized immeasurably; the initiative that all officials were implicated in the dishonesty is impractical. We do know that there was a lot of corruption when we look at gangsters similar to Al Capone. Everyone was alert of his unlawful activities but it was not possible to condemn him since his control of the law enforcement. On the other hand, a drawing is not sufficient substantiation of this - we need more sources to back up the view of the police officer in source J. For instance, source A tells of the "greatest criminal boom"; this would not have been achievable devoid of the dishonesty of law enforcement officials. Conversely, source J is not very dependable because it is only one police officer, in one city with one opinion - and there could be many motives behind what he says. The source only mentions his own experiences and as a result that does not mean it happened to all police. Nevertheless, we do have a lot of proof that backs up his views completely, once more in orientation to Al Capone. He was a gangster in Chicago (the city the police officer is talking about) and he built up a great association of fraudulent officials - this was why his businesses were so successful. But it would be impracticable to think all officials were fraudulent because of one person's point of view (or referring back to source I; two people's points of view). Despite this evidence to imply that Source I does in fact prove source J, there are also reasons against this argument, which suggest it does not prove the source at all. To begin with, the sources disagree because Source I shows all officers with their hands behind their back, which consequently suggests they are eager to receive a 'backhander', on the other hand Source J proposes that the officer tried to carry out his duties but was more or less forced ...read more.

Seeing that in the other two sources, it was created before Prohibition was introduced and therefore he would have needed to promote prohibition and the chance of its achievement, and not of its failure. In conclusion, following the discussing of the five sources that support the view that the failure of Prohibition was unavoidable, the five sources that do not support this view, and all the sources reliability, I oppose with the proclamation that all sources are supportive. Sources A, G, H, J and I portray, and support each other in the message, that the failure was unavoidable. This is revealed through the oblique messages of J and I, the written statistics of Sources G and H, and the written language of Source A. Regardless of the fact that the reliability of the sources can be called into question, the general messages of the sources are not affected and this is how I can be in no doubt of my conclusion. Sources B, C, D, E and F do not support the view, as described prior, nevertheless the reliability of sources C, D and F bestow me reason to believe their views are prejudiced, for instance, Sources C and D being created by the Anti Saloon League, well-known for their pro-Prohibition morals. It is owing to this, that I can be surer of the sources, which support the view that the failure of Prohibition was unavoidable as they are the more reliable sources. This complies with the genuine consequences (failure of Prohibition) and this is most likely why these sources can be relied on supplementary, as they are a hint of what was to occur in the future. I consent with the view that the failure of Prohibition was unavoidable, and I enclose come to this conclusion by analyzing Sources A, G, H, I and J and assessing that they are more reliable. ?? ?? ?? ?? Ahmed Gannat 11Y Mr. Riche Page 1 ...read more.